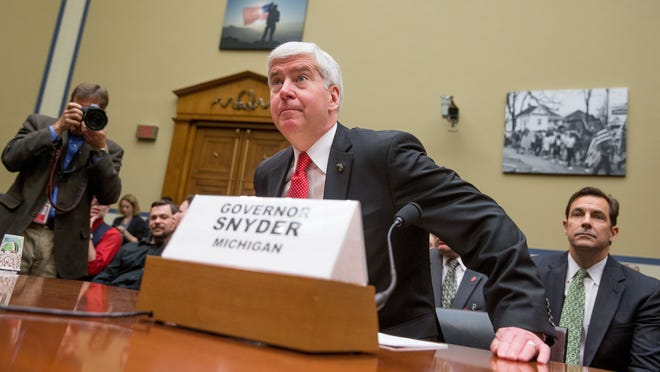 “As governor of a state that failed and poisoned its own people, don’t you have a moral responsibility to resign?” asked Rep. Brendan Boyle of Pennsylvania.

Boyle was one of at least four Democrats, including ranking Rep. Elijah Cummings of Maryland, who called on Snyder to leave office during the nearly four-hour hearing. Television reporters asked the Republican governor if he would do so as he left the committee room without making any more.

Cummings suggested that if Snyder had been the CEO of a children’s toy company that sold toys with lead “he would be hauled up on criminal charges.”

“The board of directors would throw him out and shareholders would revolt,” Cummings said.

The governor told lawmakers he was committed to solving the problem and admitted failures in state government. He repeatedly chastised “career bureaucrats” and “quote unquote experts” in the Michigan Department of Environmental Quality who failed to ensure the city added corrosion control chemicals to Flint River water it began using in April 2014.

Snyder also conceded “it would be a fair conclusion” to say Michigan’s emergency manager law failed in Flint with respect to the water crisis.

“In this instance ... you wish they would have asked more questions,” he said, referencing a series of state appointees who ran Flint before, during and after the city began using river water in April 2014.

U.S. Rep. Bonnie Watson Coleman, D-New Jersey, asked Snyder if the law failed after saying his emergency managers “gambled with the health and welfare” of Flint residents “in order to save money.”

He was also grilled over the state law by Rep. Gerald Connolly, D-Virginia, who attributed the Flint water crisis to a “failure of a philosophy of governance” advocated by Snyder. He said state emergency managers were “guilty of hubris” for thinking “they knew better than local elected officials.”

The governor acknowledged earlier administration discussions about concerns with the odor and color of Flint water, but he maintained he did not know about elevated lead levels until shortly before he announced an action plan in October 2015. He insisted that he did not learn about an outbreak of deadly Legionnaires’ disease until January 2016.

Democrats, pointing to media coverage of resident complaints and internal emails suggesting some of the governor’s top aides were aware of both issues much earlier, challenged Snyder’s timelines.

“I’ve had about enough of your false contrition and your phony apologies,” Rep. Matt Cartwright of Pennsylvania told the governor.

“…Plausible deniability only works when it’s plausible, and I’m not buying any of this that you didn’t know until October 2015. You were not in a medically induced coma for a year.”

“People who put dollars over the fundamental safety of people do not belong in government, and you need to resign, too, Mr. Governor,” Cartwright said.

Walberg asked Snyder if he was aware of information reached “the highest levels of the executive office,” but Snyder said he did not recall any conversations about Legionnaires’ at that time.

The state health department “should have done more to escalate the issue and get it visible to the public,” said Snyder, who recently called for a joint investigation into the department.

U.S. Rep. Dan Kildee, D-Flint Township, stopped short of joining committee Democrats who called for Snyder’s resignation, but told reporters during a short hearing recess it is hard to believe the governor did not know earlier about the lead and Legionnaires’ issues.

Kildee, who is not on the committee but was in the audience Thursday, said Snyder sounded like “either a governor who is loose with the facts or is so disengaged with the operation of state government that he contributed to this problem.”

Rep. Jason Chaffetz, the Utah Republican who chairs the committee, applauded Snyder for taking responsibility for the crisis and vowing to fix it. He told reporters after the hearing that he wished federal Environmental Protection Agency head Gina McCarthy had done the same as she testified alongside the governor.

Chaffetz called on McCarthy to step down but declined to weigh in calls for Snyder to do the same, saying it’s “up to the people of Michigan to deal with that.”

Cummings suggested Republicans were “desperately” trying to blame the crisis on the EPA, which did not alert the public to lead levels when one of its own scientists first began raising alarms.

“I agree that EPA should have done more, they should have rescued the people of Flint from Gov. Snyder’s vindictive administration and its utter incompetence at every level,” Cummings said.

U.S. Rep. Brenda Lawrence of Michigan, a Southfield Democrat, read Snyder a lengthy list of news headlines regarding Flint water problems that began in 2014, again questioning what he knew and when he knew it.

“This is a sad day in this country,” Lawrence said.

The governor reiterated that he was aware of early water quality concerns but not elevated lead levels. He cited a late September 2015 briefing he received in which the state health and environmental departments remained “dismissive” of findings from independent researchers.

“This is a tragedy that never should have happened,” Snyder said, agreeing with Lawrence. “I understand the anger of the people of Flint. They should be. I kick myself everyday asking what more questions could I have asked and what we should have done.”

Snyder, in his opening remarks, outlined steps the state is taking to address the man-made disaster – including $67 million in initial aid, part of which helped Flint switch back to Detroit water – and highlighted ongoing probes of the Michigan environmental quality and health departments.

“We are taking responsibility and taking action in Michigan, and that is absolutely essential here in Washington, too. Inefficient, ineffective, and unaccountable bureaucrats at the EPA allowed this disaster to continue unnecessarily,” he said.

Some 150 Flint residents and activists piled onto three buses Wednesday evening and made the overnight trip to Washington, D.C., where they lined the hallways of the Rayburn House Office building hoping for a seat in the hearing or an overflow room.

Gov. Snyder: Why I testified on Flint

Dunnigan said his 20-month old daughter, Ava Grace, has already been hospitalized three times for illnesses he believes are water related, including a respiratory virus he was told was a cousin to fatal Legionnaires’ disease.

“She’s spent every Christmas of her life in the hospital because of the water,” he said.

Flint resident Tammy Brewer said she has large sores on her body and has been losing her hair, problems she attributes to showering in the water.

“I cannot fill the tub enough for me. I try to rinse off with warm bottled water and pray. I know they’re saying it’s not from that, but for over a year and a half I’ve been complaining.”

Michigan Democrats, including Sen. Gary Peters and Rep. John Conyers, rallied with the Flint residents after the hearing.