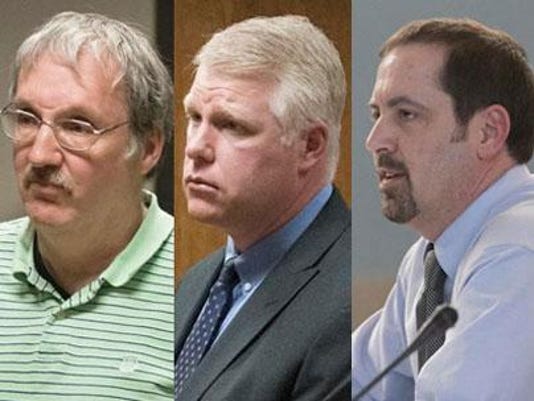 Three government workers, each charged with helping protect the drinking water in Flint, now face criminal charges for failing to do so.

On Wednesday, Michigan Attorney General Bill Schuette’s office charged two state and one Flint employees in what an investigator called the “biggest case in the history of the State of Michigan.”

Here are known connections to the city’s crisis for Stephen Busch, Michael Prysby and Michael Glasgow:

Busch, 40, of DeWitt ended the day Wednesday on unpaid leave, roughly two and a half months after going on paid leave while his actions in the Flint crisis were under investigation.

Previously, he served as the Lansing and Jackson District Supervisor for Michigan Department of Environmental Quality’s Office of Water and Municipal Assistance. State officials have said that section was responsible for mistakenly interpreting the federal Lead and Copper Rule, allowing Flint to use its river for drinking water from April 2014 until October 2015 without utilizing corrosion controls to prevent lead contamination.

Emails and internal communications released through public records requests paint Busch as a central figure in Flint’s water crisis. Snyder has said top managers in ODWMA lacked “common sense” in failing to require corrosion controls when the city began using the Flint River as its source of drinking water in April 2014.

But government emails also show Busch and Glasgow recognized problems could arise when Flint decided to treat the river as its water source. On March 26, 2013, Busch wrote that regular use of the river could:

Glasgow, 40, of Otisville and a former lab supervisor, also warned of rushing the Flint plant into operation with the river water.

“If water is distributed from this plant in the next couple weeks, it will be against my direction,” Glasgow wrote in an April 17, 2014, email to officials at the DEQ, suggesting management above him had its own “agenda.”

In addition to misconduct in office, the charges laid out by Schuette Wednesday allege Busch tampered with evidence by “manipulating monitoring reports mandated by law.” It is likely a reference to DEQ officials passing on water sampling results mandated by the Lead and Copper Rule that failed to meet testing criteria. Testing is to be conducted at Tier 1 sites, houses that are served by lead lines.

Busch faces an additional charge of violating Michigan’s Safe Drinking Water Act by failing to require Flint to utilize corrosion controls when it began drawing from the river in April 2014.

A key juncture in the Flint crisis came early in 2015, when federal Environmental Protection Agency officials attempted to discern if Flint was using proper controls. EPA officials have said they were misled by the DEQ about the situation, and both Busch and Prysby were at the heart of that exchange.

Prysby, 53, of Bath was also placed on unpaid leave Wednesday. He had previously held the position of district engineer with the DEQ.

In late February 2015, when the EPA first began inquiring about Flint’s use of corrosion controls, emails show both he and Busch were confident that Flint did not need to implement corrosion controls until after two, six-month periods of water testing had been concluded.

But Busch told EPA in an email that Flint had “an optimized corrosion control program” in place. Two months later, after receiving an email from Prysby, a DEQ official admitted to EPA water expert Miguel Del Toral that no treatments were being implemented.

At the same time DEQ was allegedly misinforming federal regulators about corrosion control efforts, Prysby was seemingly downplaying sampling that showed an extraordinary high lead level at one Flint home.

In responding to EPA questions about that result, Prysby wrote of the DEQ’s Adam Rosenthal: “I recall Adam showing me a high lead/copper sample result (perhaps it was this one)... as part of the city’s routine lead-copper monitoring. If so, it was a stagnated sample as part of the sampling protocol. Adam mentioned that all other samples were below (the federal standard)...”

“When we prove these allegations — and we will — Mr. Busch and Mr. Prysby will be facing five years in prison for this count alone,” Schuette said.

According to Schuette’s probe, Busch and Prysby also “obstructed and prevented” a county health official from investigating Legionnaires’ disease outbreak blamed in the deaths of 12 people in 2014 and 2015 while Flint was using river water.

Last month, while appearing before state investigators, Glasgow laid the blame for Flint’s lack of corrosion controls at Prysby’s feet. The DEQ official, he said, had told him the city did not need to use corrosion controls when Flint’s treatment plant came on line.

In a 2015 email to another city officials, Glasgow wrote: “We originally had this chemical in the design, but the DEQ did not mandate it from the start. (They) informed us to wait and see the results of our lead and copper sampling to determine if it was necessary.”

Glasgow was involved with overseeing the city’s water sampling program under the guidelines of the federal Lead and Copper Rule. At a time when the city was drawing its water from the Flint River and failing to treat it to prevent corrosion, sampling was being conducted at homes that did not have lead service lines — part of the testing criteria.

Instead, samples were taken from few homes with lead lines — artificially lowering the overall lead detected around the city. It allowed Flint to report compliance with the Lead and Copper Rule when it did not meet federal standards.

In 2015, Glasgow seemingly admitted to shortcomings in the way samples were collected when confronted by an interviewer with ACLU-Michigan. When asked how testers could be sure they were getting samples from homes with lead lines, he essentially said there was no way to be sure.

“We throw bottles out everywhere just to collect as many as we can to try to hit our numbers … We just turn in every result that we get in,” he said.

Glasgow is accused of tampering with evidence related to Flint’s lead and copper testing reports. The willful neglect of duty charge against Glasgow is a one-year misdemeanor for failing to perform his duties as a licensed municipal water treatment operator.

Michael Prysby: The charges against him include: two counts of misconduct in office; one count of conspiracy to tamper with evidence; tampering with evidence; and separate violations of water treatment and monitoring laws.

Michael Glasgow: He is charged with one count of tampering with evidence for changing lead water testing results and one count of willful neglect of duty as a public servant.