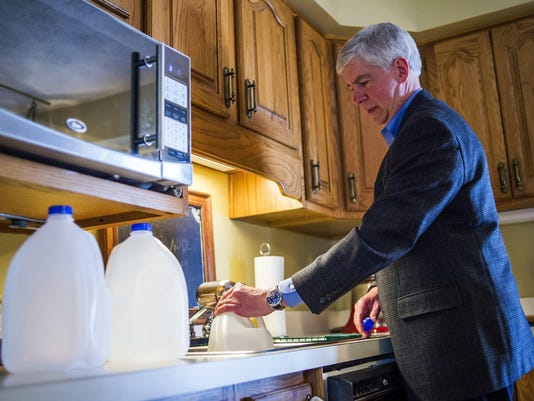 Gov. Rick Snyder has said he will use Flint filtered water for 30 days at his home in Michigan. He says he is focused on solutions for the city.(Photo: Jake May / AP)

Being sued is part of the job for the state’s highest elected official, but these are especially busy days for Gov. Rick Snyder’s legal team.

Litigants looking to right alleged wrongs by the state start at the top with the governor, who’s in charge of signing into law and enforcing the state’s policies and statues.

These civil actions, which legal experts say can number into the hundreds or even thousands a year in local, state or federal courts, typically cover a wide variety of topics, from roads to billboards and from corrections to civil rights.

Yet lawsuits against the state or state officials related to contaminated water in Flint alone reached at least 82 separate cases at one point last week.

Most have been filed by Flint residents seeking to hold Snyder and others personally liable for damages. Other suits seek replacement of the pipes that leached lead into Flint's water supply and long-term medical monitoring and health care.

And with the governor publicly speaking about what he knew or didn’t know about aspects of the crisis, legal experts expect Snyder will likely be deposed in many of these cases as well as be called to testify if a case reaches trial.

Republican strategist John Truscott said governors get sued all the time but rarely so many times on a single issue.

“With (former Gov. John) Engler, we were notified almost weekly. But they were all on different issues,” Truscott said. “With Snyder, it’s so concentrated and that’s why people take notice.”

Snyder also faces numerous lawsuits stemming from Michigan’s emergency manager law and the state’s management of Detroit Public Schools. And while he has been through the daily legal meat grinder before, when his legal team in the Detroit bankruptcy case was in daily contact with him about all of the city’s and state’s developments in court, the Flint lawsuits will be different, observers say.

Lansing attorney Kelly Keenan, who was Gov. Jennifer Granholm’s top attorney, said governors have legal teams to comply with the endless paperwork, research and court filings each case takes to defend, which often means governors get briefings but rarely set foot in a courtroom.

Yet it is highly likely, Keenan said, that Snyder will be deposed in some of the cases over Flint’s contaminated water because attorneys for the plaintiffs will argue he has personal knowledge of the crisis that can be of value.

Last week, the governor pinpointed Sept. 28, 2015, as the date he learned the extent of the problem, after an overnight briefing explicitly claimed Flint was not experiencing a health crisis. Faced with “outside people” saying otherwise, Snyder “pressed” his experts during a conference call, he said. They finally admitted the crisis during that call, according to the governor.

“I would not be surprised to see him deposed. Not all 81 cases, but I wouldn’t be shocked if there are a few cases where he is deposed or participates in discovery,” Keenan said. “It will be interesting. I’ve never seen anything like that.”

While he never practiced as an attorney, Snyder has a law degree and could use his University of Michigan Law School knowledge to navigate issues.

He gets a daily briefing on a host of state issues, including litigation briefings from his legal team. Then he moves on to his daily duties as the state’s top elected leader.

The onslaught of legal action against Snyder and the state overshadows anything former Granholm legal counsel Steve Liedel said he ever had to address, when the Governor’s Office would keep an eye on five to 10 cases.

Liedel, who worked for Granholm as deputy legal counsel from 2003 to 2008 and chief legal counsel until 2010, said unless the governor’s staff attorneys have experience with product liability or have a class action background, they would have to bring in a team to coordinate the response.

“You begin to move beyond the practice of law to project management,” Liedel said. “My first reaction is a lot of these are going to be consolidated, but they need to be tracked and followed. ... It becomes a pretty Herculean task. It’s the skill set you won’t find in state government.”

The number against Snyder recently dropped to 16 after some parties dropped the state from their list of defendants, according to the Governor’s Office.

Snyder spokesman Ari Adler said last week that at least 64 of the dismissed cases are still active lawsuits against other defendants, but the state or a state official was removed.

“That’s why our number is much smaller now. ... If cases do get dismissed by the courts, it can affect the standing of other similar cases. And, once a case is dismissed in federal court, people may turn around and sue in state court,” Adler said. “This is all long from over.”

Under authority from the State Administrative Board, Snyder can spend up to $1.2 million to hire private attorneys to represent him in civil and criminal proceedings related to the Flint water crisis.

Detroit attorney Eugene Driker and his law firm were hired to represent the governor and his office in civil lawsuits brought by Flint residents over the city’s lead-contaminated water.

Driker will be charging the taxpayers $540 per hour for his services. Two other attorneys at his firm will charge $400 per hour, according to the contract.

During remarks at a Pancakes & Politics breakfast at the Detroit Athletic Club, Snyder talked about the challenge of pending lawsuits and legal challenges.

“There are lots of lawsuits, there will probably be more lawsuits, and the issue is how do we do good things to help the people of Flint. That’s where I’m putting my focus,” Snyder said at the event on April 11.

“In many cases the lawsuits, lawyers can do well by them. I appreciate the legal profession. It’s not a knock on them. We have a legal system that’s intended to address issues like that, but what I want to do is say what can we do near term, and we are.”

For example, Snyder said, the state has added school nurses in Flint and replaced fixtures in Flint schools because the state learned there is no requirement to do any water testing in schools.

“That’s crazy, folks. It’s not required in federal rules. What we’re doing now is how do we do more early childhood services. … Those are the kinds of things I want to stay focused on. Not these lawsuits.

“But can you effectively govern when you’re dealing with this crisis and other things? You just keep going, and you get the job done.”

Snyder gets a daily briefing on a host of state issues, including litigation briefings from his legal team, but his involvement is limited this early in the cases, observers said.

The federal lawsuit sought relief — action by state officials — for constitutional violations, as do many of the Flint cases.

“The governor (being named) is not legally important. Just as he was not important in the marriage equality case. Relief is against state officials,” Snyder said.

In state courts, where many of the plaintiffs are seeking damages, states are immune, but state officials do not have immunity, Sedler said.

“To overcome a claim of immunity you have to show they knew their actions was unconstitutional. Assuming all these allegations in these complaints can be proved, there would be wide area for damages,” he said.

Truscott, president of Truscott Rossman public relations in Lansing, said he thinks many of the Flint lawsuits will be hard to win in court. And if one gets dismissed, he said, it means many others will, too.

“My sense is (Snyder) is focused on moving forward and letting the lawyers deal with the lawsuits,” Truscott said. “I think it’s too early in the process for it to be a distraction for him.”