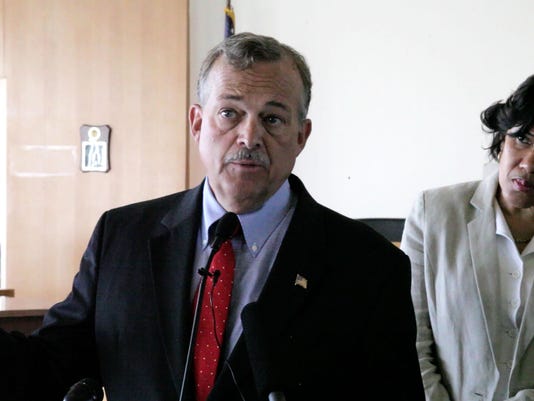 Flint — Mayor Karen Weaver announced Friday that an additional 200 to 250 lead service lines will be replaced in Flint by the end of September as part of her Fast Start initiative, with 5,000 more water lines to be removed this fall.

This next phase is being funded by $2 million the state reimbursed Flint for funds paid in returning to the Great Lakes Water Authority last year, after it was discovered that Flint River water, which was untreated with corrosion control, was leaching lead into the city’s water system.

Weaver said the effort will include Wayne State professor Shawn McElmurry’s team, funded by a grant by the National Institute of Health, in collecting water samples before and after pipes are removed to insure all sources of lead are identified.

McElmurry said his team’s goal is, “in addition to understanding other possible sources of lead, is to also understand how the water system is recovering.”

McElmurry, an associate professor at Wayne State’s Civil and Environmental Engineering department, said participation in the study is voluntary and won’t affect whether a customer’s service line is replaced.

Another goal of the study, McElmurry said, “is to remove uncertainty about which homes have lead service lines,” an issue that has plagued pipe removal up until this point. The issue stems largely from outdated water infrastructure records.

Weaver said she is “hopeful” the study will help improve citizens’ confidence in their water quality.

“We know that trust has been broken,” she said. “We also know that many folks still don’t trust the filters, but for those who have had their pipes replaced, they know that the the water coming from their tap is safe.”

Gen. Michael McDaniel, a member of the Flint Water Agency Coordinating Committee, said this “pilot phase” will help officials understand how to keep costs down and “develop more efficiencies as we move forward.”

McDaniel, who is coordinating the lead pipe removal between the state departments, federal agencies, the city and contractors, said “we’re focused on the highest densities of lead service lines, based on criteria, where at least 10 percent of the samplings are above the action levels, and where we have children under the age of 6.”

Of the 250 homes to have pipes replaced, there are “about 40 homes that are unoccupied” McDaniel said. “If in fact the home is unoccupied and is unable to be reoccupied” or listed on the Genesee Land Bank’s list for demolition, “the contractors will ‘cut-and-cap’ the lines leading to those houses.”

McDaniel said the procedure will “preserve the ability for a new home to be built” on the property with a new line.

According to the city, 50 homes on Flint’s east side are contracted to W.T. Stevens. On the southwest side, Johnson & Wood will complete an additional 50 lines.

In northwest Flint, about 100 lines of “copper on the city side and lead on the residential side” between the meter and the main will be partially removed and replaced by Goyette Mechanical Inc., McDaniel said.

Residents in these areas will be contacted by the contracting companies starting on Friday and throughout next week to sign waivers before any work can begin.

During this time, residents are encouraged to stock up on bottled water.

For the 200 homes that will receive “full or partial service line replacement,” the additional goal, McDaniel said, is to identify inefficiencies in the water system.

According to a study by Michigan Department of Environmental Quality, “nearly 60 percent of water is lost in the system is due to water main breaks” in Flint’s infrastructure, McDaniel said.

“It’s an issue we can’t have continue, because it’s a loss of revenue to the city,” he said. “We’ve got breaks in the water mains, and a uptick in breaks in the last two years.”

The second issue, McDaniel said, is some homes need new water meters. “If it’s a case of a faulty meter, the teams will replace it,” he said.