Members of the public enter the University of Michigan North Bank Center on Jan. 11, 2017 for the Flint Water Town Hall meeting. At right is Melissa Mays, a community activist throughout the Flint water crisis. Max Ortiz, The Detroit News
Fullscreen

Flint Mayor Karen Weaver holds a cup of water as she addresses members of the public at the Flint Town Hall. Max Ortiz, The Detroit News
Fullscreen 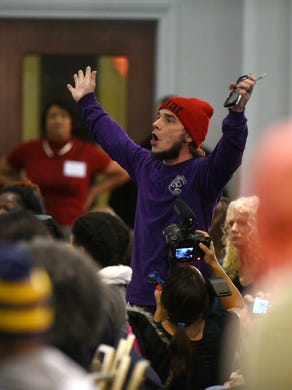 A concerned resident passes his question to be answered by a health panel during the meeting. Max Ortiz, The Detroit News
Fullscreen 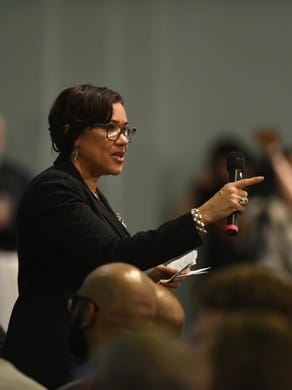 Flint — Flint residents hoping for some major news about the safety of their long-troubled drinking water got something less than that at a town hall meeting Wednesday.

Government officials contend that city water reaching homes continues to improve in terms of proper lead, copper, alkaline and bacteria levels. They described Flint as very much like other American cities.

Yet the distance between Flint residents and the ability to trust their water and those in charge of it appears wide. Before the start of the meeting, Flint resident Tony Palladino Jr. was realistic.

The hundreds of residents on hand at the information-sharing meeting heard several discouraging facts:

■That they should, more than 30 months into Flint’s water crisis, continue to use filters at home.

■That it will take roughly three years for Flint to replace lead water service lines throughout the city.

■That the money to make that happen has not been secured.

■The city’s treatment plants needs well over $100 million in upgrades and won’t likely be ready to handle water from the new Karegnondi Water Authority until late-2019- early 2020.

Representatives from local, state and federal agencies involved in the monitoring Flint’s water quality gathered to present their latest information to the public. Many in the audience crumpled plastic water bottles whenever they heard statements they did not agree with.

There was a lot of crumpling. In the midst of a question-and-answer period, one audience member challenged a panel of government experts.

“I’ve got kids that are sick,” he said. “My teeth are falling out… . You have no solution to this problem.”

But the official message was hopeful. In the last six months of water sampling in Flint, lead readings averaged 12 parts per billion, below the federal action level of 15 ppb, and down from 20 ppb in the first six months of 2016.

Marc Edwards, a Virginia Tech researcher who helped identify contamination problems, said: “Levels of bacteria we’re seeing are at dramatically lower levels than we saw a year ago.”

Flint has struggled with water issues since April 2014, when the city was under the control of an emergency manager appointed by Gov. Rick Snyder. In an effort to save money, the city ended its decades-long relationship with the Detroit Water and Sewerage Department and began getting its water from the Flint River.

Over the next 18 months, a failure to properly treat that water allowed lead to leach from delivery pipes. Researchers eventually established the presence of high lead levels in the blood of local children, and Flint returned to buying its water from Detroit.

But damage to the pipes during the year-and-a-half using the Flint River has had a two-fold impact: the recovery has been slow and residents have little faith in the safety of the water.

Mayor Karen Weaver has attempted to spearhead a program of quick pipeline replacement, but that process has been hindered by a lack of funding.

“It’s true that everyone wants their service line replaced immediately,” said retired Brig. Gen. Michael McDaniel, a member of the Flint Water Agency Coordinating Committee who is heading the city’s replacement program. “It’s also true that I can’t do them all immediately.”

The gathering featured many of the same government officials and researchers who met in Chicago on Tuesday for a closed-door session. Following that meeting, EPA Region 5 Acting Administrator Robert Kaplan told the Flint Journal the “consensus on the system was it was improving overall.”

Critics were quick to downplay that consensus.

“The state’s claims reflect the same kind of careless interpretation of EPA regulations that got Flint into this mess in the first place,” said Henry Henderson, Midwest program director with the Natural Resources Defense Council.

“Everyone is looking forward to the day when the people of Flint will be served safe drinking water that meets requirements set forth under the law. But that day isn’t here yet.”