The hearing began for Dr. Eden Wells, the chief medical officer who faces criminal charges related to the Flint crisis 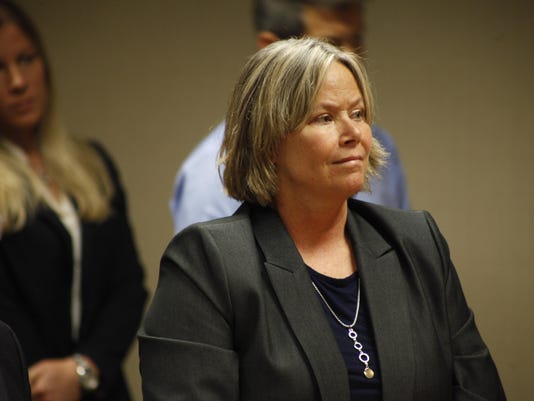 Dr. Eden Wells, chief medical officer of the state of Michigan, is charged with two additional felonies on Monday, Oct. 9, 2017. Wells is already charged with obstruction of justice and making false statements. The new charges carry penalties between five and 15 years in prison.(Photo: Jacob Carah / Special to Detroit News)

The hearing for Wells, which was supposed to start at 9:30 a.m., was delayed for more than an hour and a half as attorneys met in the chambers of 67th District Judge William Crawford II. Her attorneys said they learned only Monday morning about the additional charges.

Flood said the new charges were due to “some revelations” that stemmed from testimony during last week’s preliminary exam hearing against state Health and Human Services Director Nick Lyon, who is also charged with involuntary manslaughter as well as obstruction of justice.

“I really can’t get into the details of it but I think we’d be derelict if we didn’t charge her,” Flood told reporters following the abrupt hearing. “Based on a new review of other documents and testimony that came out last week, we believe that discovery put us in this place.”

Among the testimony last week, Becker said a January 2015 report showed 45 Legionnaires’ disease cases in the Flint area, acknowledged the form of pneumonia “could kill somebody” and said a public warning could have been issued then about the outbreak. Zervos also said the state needed to give the public and medical providers more notice about Legionnaires’ cases to “save lives.”

The next hearing has been rescheduled until Nov. 6. Flood said his team is giving Wells’ lawyers notice of the new charges and testimony at the end of the preliminary exam if a judge decides to send her case to trial.

Wells had been charged with obstruction of justice and making a false statement related to a Legionnaires’ disease outbreak in 2014-15 that has been linked to at least 12 deaths and 79 illnesses. The obstruction charge carries a prison term for up to two years.

Wells joins five other current and former state and Flint officials in being targeted with failing to act to prevent the death of 85-year-old Robert Skidmore of Genesee Township.

Following the hearing, Wells said “I’m OK” when asked how she is doing.

Wells’ attorney, Jerold Lax, said his legal team was prepared to proceed with the prior charge, but “under the circumstances, we reluctantly agreed to an adjournment so as to be able to prepare to deal with the new charges that have been filed.”

Lax said he had “no reaction” but will “fully review any information” the prosecution provides. He said he had “some indication” that more charges might be coming.

When asked if the new charges were a tactic to get Wells to cooperate in other prosecution cases, Lax said, “I don’t want to pretend to be able to read the prosecution’s mind. We’ll simply deal with what he says and respond to it.”

Flood said in response to the plea deal question, “I’m not even there right now.”

“So while Flood may say he’s not thinking about having her as a cooperating witness at the moment, it is always in the back of the prosecutor’s mind,” Henning said in a Monday email.

“... That said, I doubt we will see any cooperation agreements before a decision on whether to send the manslaughter charges forward after the preliminary exam.”

Wells had previously been accused of giving false testimony to a special agent and threatening to withhold state aid from the Flint Area Community Health and Environment Partnership if the partnership didn’t stop its probe into the source of the Legionnaires’ outbreak in the Flint area.

Gov. Rick Snyder has kept Wells and Lyon in their posts despite the filing of the criminal charges.

State Attorney General Bill Schuette has brought charges against 15 individuals in his Flint investigation of which a few have resulted in the withdrawal of charges or settlements. Lyon has already had four days of testimony in his preliminary exam hearing but it has been delayed until Nov. 1.

Some of the same witnesses who testified in the Lyon case are expected to testify against Wells.