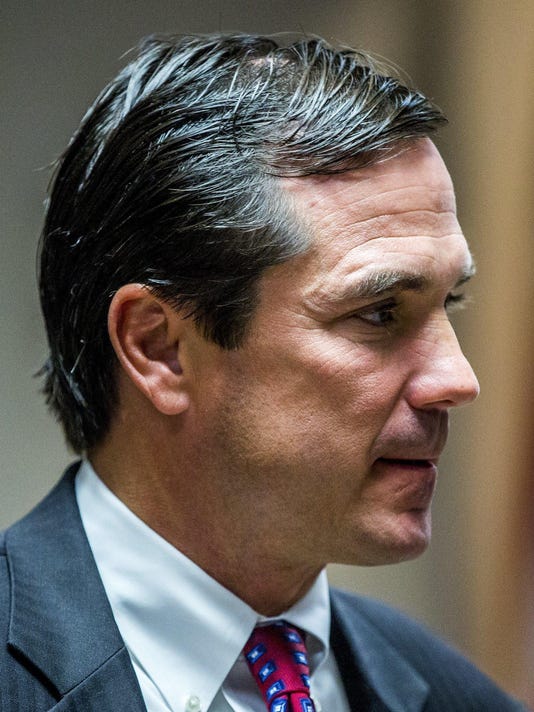 An attorney for state Health and Human Services Director Nick Lyon on Monday used his cross examination of a prosecution witness to try to show that the state department helped a Genesee County Health Department overwhelmed by the Flint water crisis.

Lyon faces involuntary manslaughter and misconduct in office charges brought by Attorney General Bill Schuette related to the Flint water crisis that resulted in lead-related health problems and an alleged link to the Legionnaires’ deaths.

Special Prosecutor Todd Flood said after the hearing in Flushing under 67th District Court Judge David Goggins that he will be resting his case. Lyon’s attorneys are expected to call witnesses at another hearing.

Willey and Henry went over in detail multiple exhibits, documents and emails from 2014 and 2015 during and after Flint switched its water source from the Detroit area water system to the Flint River. The questioning mostly elicited scores of “I don’t know” or “yes” or “no” answers.

There were conversations and email exchanges between state officials and Genesee’s health department, according to Henry’s testimony, that he did not know about or was privy to. County health officials struggled with the 2014-15 Legionnaires’ outbreak disease that eventually sickened 79 people and killed 12 others, and Henry said at an earlier hearing that the health department was missing in action.

In a late January hearing, Henry said state health officials were slow to warn the public about the Legionnaires’ outbreak and resistant to release information related to lead in water that affected children.

Willey pressed Henry to remember various conversations with the Michigan Department of Environmental Quality, the federal Centers for Disease Control and Prevention as well as the state Department of Health and Human Services.