Judge weighs whether to dismiss Snyder, others in Flint water lawsuit

Judge weighs whether to dismiss Snyder, others in Flint water lawsuit 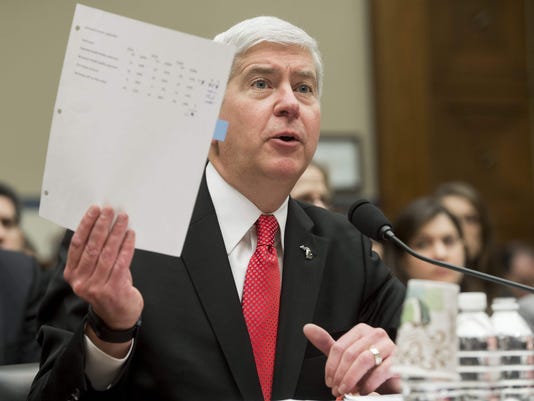 Gov. Rick Snyder testifies about the lead water in Flint during a House Oversight and Government Reform Committee hearing in 2016.(Photo: Getty Images)

Ann Arbor — A federal court judge said Wednesday she would issue a written opinion after hearing nearly six hours of arguments in a consolidated class-action lawsuit filed against government officials in the wake of the Flint water crisis.

A dozen attorneys representing Gov. Rick Snyder, former state Department of Environmental Quality employees, former Flint emergency manager Darnell Earley and other officials told U.S. District Court Judge Judith Levy their clients should not be included in lawsuits arising from the Flint water contamination crisis because of government immunity and also because the allegations did not meet legal standards.

Several Flint residents sued in 2016, alleging a slew of government officials were responsible for switching the city's source of water to the Flint River knowing it was not treatable and would be dangerous to consume.

Levy consolidated 12 class action lawsuits — stemming from Flint switching from water from Detroit's system to the Flint River beginning on April 25, 2014 — into one major case.

Levy must now decide whether to dismiss the defendants in the case.

Flint resident Luke Waid sued in 2016 on behalf of his then 2-year-old daughter, who tested positive for lead. He has asked state and city officials to pay for medical monitoring and future costs of medical care from injuries she sustained through exposure to the city’s contaminated water system.

Levy immediately acknowledged the complexity of the consolidated case, which has multiple plaintiffs, defendants and attorneys involved in a water crisis that garnered international humanitarian attention, criminal charges against some state employees and numerous other civil cases.

"This is a complicated case. This is a hard case. I really want to hear about the nuanced portions of your arguments," she told more than 45 attorneys in the courtroom.

Sheldon Klein, who represents the city of Flint, told Levy the case against the city should be dismissed because the plaintiffs failed to meet the legal requirements of the equal protection clause, which requires evidence that different groups of people were treated unequally.

"This (water crisis) affects all people in the city of Flint equally; there was no different treatment," Klein said.

Levy reminded Klein that the allegation made by Flint residents was that poisoned water was given to residents in their water lines.

"Is your argument that everyone in Flint was poisoned equally?" Levy asked Klein.

Margaret Bettenhausen, an assistant attorney with the Michigan Attorney General's Office, who represents the governor and several state officials, said both Snyder and former treasurer Andy Dillon are entitled to qualified immunity.

She said they were not responsible for local decisions including water treatment.

At the time of the water switch, Flint was under the control of a state-appointed emergency manager. Flint did not treat water from the Flint River with proper anti-corrosion agents.

“We are led to assume that the governor is responsible for all local decisions. That is not true,” Bettenhausen said.

Levy responded: “But they had advisers who educated them on science.”

Peter Henning, a federal court expert and former federal prosecutor, said for the plaintiffs' case to move forward over the claim of qualified immunity for the individual defendants, Levin will have to find that there was a clearly established constitutional or statutory right to uncontaminated water.

"That may be difficult to prove because this is such a new area that courts have not focused on before, so meeting the standard will not be easy," Henning said.

"In addition, if Judge Levy rules that qualified immunity does not apply, that can be appealed immediately to the Sixth Circuit, which would further slow the progress of the class action," Henning said.

Attorney Michael Pitt, who represents Flint residents, told Levy that race played a role in the decision to switch Flint residents — but not Genesee County — to the Flint River, which was widely known to be contaminated, he said.

Levy pressed Pitt to further explain how race played a role in the decision and how Snyder had the ability to control that decision.

"He knew the Flint River was dangerous, and he allowed it to proceed," Pitt said.

Attorneys for the defendants declined to comment after court.

About a dozen Flint residents attended the hearing, many wearing Flint Lives Matters T-shirts, including Ariana Hawk who was there with her three children.

"I have hope that the judge is an understanding judge," Hawk said. "I saw that today. She had the same kind of questions we would have. She wants to understand what happened just like we do."

"The water is still not safe," she said.

The city's water has tested below federal lead standards for nearly two years, but many residents still refuse to drink filtered water from their taps.

Pitt said he expects Levy to narrow the case but that most of the claims will move forward. He predicts a settlement in the end, saying the state cannot afford to take the case to trial.

"It would bankrupt the state," he said. "The entire community has been injured."