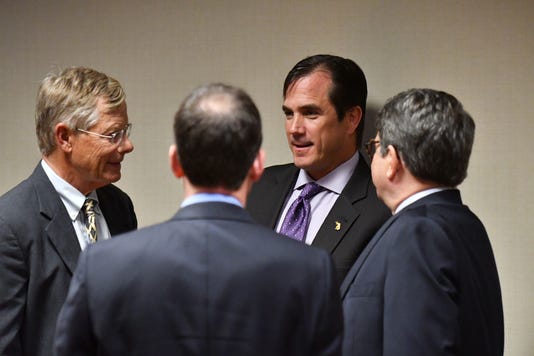 Flint — Michigan health and welfare chief Nick Lyon was "corrupt" in his handling of the Flint area Legionnaires' disease outbreak and will stand trial on felony charges including involuntary manslaughter, a judge ruled Monday.

67th District Judge David Goggins made the announcement in a nearly 160-minute ruling from the bench after delaying the decision more than three weeks in the most anticipated Flint water prosecution case. Lyon shook his head in disappointment as the judge read his ruling.

Goggins said the defense's argument that Lyon should not have been bound over on the charges "was just not enough to overcome the prosecutor in this matter to show probable cause" that crimes were committed and needed to go to trial.

When the judge made it clear that the state's health chief would go to trial, some courtroom attendees quietly whispered "Yes, yes, yes."

"I do find based upon the totality of all the evidence ... I find this behavior over this time period of withholding information corrupt based upon misconduct in office for probable cause standards," Goggins said.

The judge also decided Lyon "willfully and neglectfully refused" to protect the lives of two Flint area men who purportedly died from Legionnaires' by failing to "act to appropriately with regard disseminating notices to the public."

The state's health chief is the highest-ranking official of Gov. Rick Snyder's administration who has been charged with felonies by Attorney General Bill Schuette's office concerning the Flint lead-contaminated water crisis.

Lyon is set to go to trial in Genesee County Circuit Court on two counts of involuntary manslaughter and one count of misconduct in office connected to the Flint region's 2014-15 Legionnaires' disease outbreak that killed 12 people and sickened another 79 people. There was no public notice about the outbreak until a Snyder mid-January 2016 press conference in Detroit.

Lyon "had the ability" to know how many Legionnaires' disease deaths there were in the Flint area and has the "power" as the state's health chief to protect lives and "enforce laws" to that end, the judge ruled, citing prosecution witnesses including retired state epidemiologist Corinne Miller. Goggins found that Lyon knew about the outbreak in 2015.

Special Prosecutor Todd Flood recently added a misdemeanor charge of "willful neglect" to protect the health of Genesee County residents. Goggins indicated Monday he would let the trial judge decide how to handle that charge. 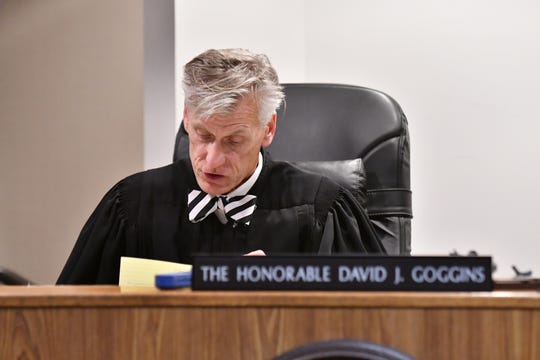 Flood left the courtroom receiving handshakes and back slaps from his team and residents but declined to comment.

"We're not looking at today as a win or a loss," said Andrea Bitely, a spokeswoman for Schuette, who appointed Flood.

"We're looking at today as the first step and the next step for justice for the moms and the dads and the kids of Flint, specifically for the families of Mr. Snyder and Mr. Skidmore," she said of the two men prosecutors allege died of Legionnaires'.

"The attorney general is very proud of the work done by Mr. Flood and our Flint water team, and we're continuing to press forward in this case and several others."

But Lyon attorney John Bursch promised to file a swift appeal because Goggins mentioned nothing about testimony by defense witnesses. It will be made in Genesee County Circuit Court.

"I can't tell you how disappointed we are in the ruling today and here's exactly why: The judge went on for two hours summarizing all of the prosecution's best testimony and didn't take into account any of the contrary testimony, any of the disputes," Bursch said after the hearing.

"You heard a lot of things today of things that went wrong. They're not all Director Lyon's fault. He is not vicariously liable for all 14,000 employees of the Department of Health and Human Services," he said.

"He is not corrupt and there's no evidence of that," Bursch said about the judge's description of Lyon.

The state's health chief "is remarkably strong for someone who has been persecuted in a matter where he doesn't bear the criminal culpability that the prosecutor alleges, much better than you or I would if we were in the same position," he said.

Goggins told The Detroit News after the hearing that he didn’t feel the need to address the defense witness testimony from the bench as he did the prosecution witnesses.

If convicted, Lyon could face up to 30 years in prison on the manslaughter charges and up to another five years on the misconduct charge. Up to $25,000 in fines could be added for the three felony charges.

Michigan Gov. Rick Snyder defended Lyon after the judge made his ruling.

"Nick Lyon has a long and tenured career in public health and has been a strong leader at the Dept. of Health & Human Services," Snyder spokesman Ari Adler tweeted Monday. "Even during an unprecedented, nearly yearlong preliminary exam, Director Lyon has remained focused on his job and Flint's full recovery...

"Like every other person who is charged with a crime, he should be presumed innocent unless and until proven guilty beyond a reasonable doubt... Director Lyon has my full faith and confidence, and will remain on duty at DHHS unless convicted of a crime after a full trial by a jury of his peers.”

After the judge's decision, Flood asked Goggins to order that Lyon not be allowed to communicate with any Department of Health and Human Services employees about the criminal charges.

Lyon attorney Chip Chamberlain objected to Flood's request, saying Lyon still needs to run a statewide agency. Goggins decided that any communications between Lyon and state employees must be go through attorneys.

Flood also asked that Lyon turn over any guns and turn over his passport even though the health director is not considered a flight risk. Lyon does not own any guns.

Lyon left the courtroom with his wife surrounded by security and television camera crews.

"Today’s decision is a meaningful step toward long-awaited justice for the people of Flint and those who lost their lives due to Lyon’s poor leadership, and a clear sign that he should no longer be heading the state’s Health and Human Services Department," said Neeley, who was a Flint council member when the city switched its water supply source.

Goggins was in no hurry to make a decision. Reading from a yellow notepad full of notes, he read from every page.

The judge covered testimony by every person from the more than 20 prosecution witnesses. They ranged from state health officials to the relatives of elderly Flint area residents Richard Skidmore and John Snyder, whom the prosecution say died from Legionnaire's disease that Lyon failed to warn the public about.

The judge found there was probable cause that a "reasonable person," based on the evidence, could find the defendant guilty. But the prosecution must clear a higher threshold of evidence of "guilt beyond a reasonable doubt" during a jury trial. 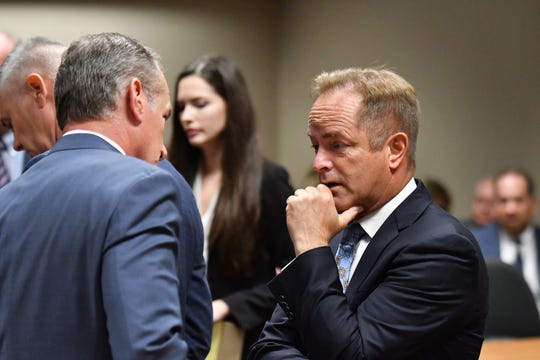 Lyon walked into court with his wife more than a half an hour before the hearing was scheduled to start, hugging family members and then sitting down with his wife on a bench outside the courtroom. The hearing started 45 minutes late.

Among those in the courtroom were former state Sen. Roger Kahn, R-Saginaw, and former Snyder Community Health Director James Haveman, who has supported Lyon.

The 11-month preliminary exam involved 10 months of testimony — starting last September with prosecution witnesses and then this spring with defense witnesses.

Prosecutors contended Lyon should have warned the public of the Flint region's Legionnaires' disease outbreak and could have saved lives.

The defense lawyers countered that Lyon relied on the expertise of department employees, none of whom recommended issuing a public warning. They also argued the prosecution failed to make any connection between Lyon and the men's deaths, arguing they died from long-term diseases but not Legionnaires'. 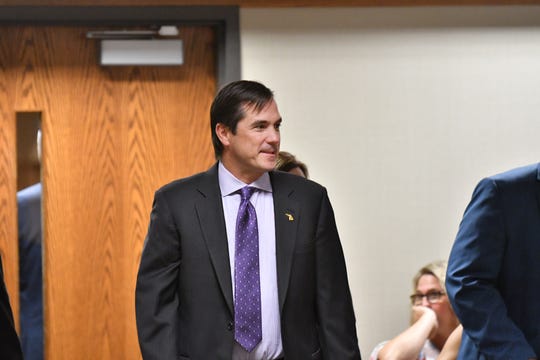 Because Skidmore and Snyder went to McLaren hospital in Flint, where medical officials had been warned about Legionnaires' disease, a public announcement wouldn’t have prevented their deaths, the defense said.

Michigan Chief Medical Executive Eden Wells and four current and former Michigan Department of Environmental Quality regulators are still going through their preliminary exams after being charged criminally. No date has been set for Wells' bind-over ruling.