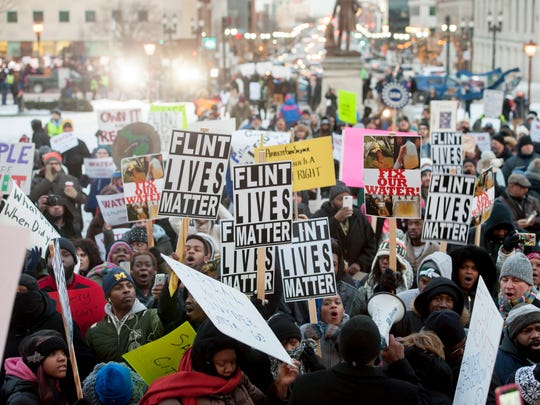 A federal judge ruled Thursday that a lawsuit Flint residents filed against the government over the city’s water crisis can move forward.

The residents sued the U.S. Environmental Protection Agency in 2017 for "mishandling" the crisis, arguing that agency officials negligently responded, including by failing to use its enforcement authority under the Safe Drinking Water Act to intervene, investigate and warn about the health risks.

“This ruling will shake up the EPA, which has refused to accept responsibility in causing the catastrophe," said Michael Pitt, who is representing Flint residents in this case as a partner in Royal Oak-based Pitt McGehee Palmer & Rivers. "The EPA is mandated by Congress to be a watchdog over state environmental operations and is required by law to take over drinking water systems when a significant public health risk becomes apparent.”

In a statement, Pitt said he is representing 5,000 Flint residents in the lawsuit.

One of the plaintiffs in the suit is Jan Burgess, a former Flint resident who was responsible for first notifying the EPA about the growing water problems in October 2014. Six months earlier, the city had started drawing its water from the Flint River after ending a decades-long relationship with Detroit's system.

In January 2016, The Detroit News reported that EPA Region 5 water expert Miguel del Toral warned of Flint water problems in a June 2015 internal memo. But then-Region 5 Administrator Susan Hedman said she sought a legal opinion on whether the EPA could force action that wasn't completed until November 2015 — after the state recognized the crisis.

It was not until Jan. 21, 2016, months after testing had indicated high levels of lead in the water, that EPA issued an emergency order in the crisis. The agency’s probe into the crisis was announced the same day.

In her opinion Thursday, U.S. District Judge Linda Parker said that when passing the Safe Water Drinking Water Act, “Congress intended to leave the primary responsibility for overseeing public water systems with the states,” but “expressly directed the EPA to intervene under specified conditions.”

“…The EPA’s failure to warn Flint residents of the severe health risks
the city’s water supply posed to them cannot be justified by any permissible
exercise of policy judgment,” Parker said. “Within weeks of the switch to the Flint River, the people of Flint suffered rashes and hair loss.

"The EPA was well aware that the Flint River was highly corrosive and posed a significant danger of lead leaching out of the city’s lead-based service lines at alarming rates into residents’ homes. The EPA was well aware of the health risks posed by lead exposure, particularly to children and pregnant women. … Further, the EPA knew that (the Michigan Department of Environmental Quality) and Flint officials were not warning Flint’s residents that they were being supplied lead-laced water.”

Parker also concluded that the residents’ claims about the government negligently responding to citizen complaints are not barred by the the Federal Tort Claims Act’s discretionary function exception.

“… Once the government decided to act, it was required to do so without negligence,” she wrote.

EPA representatives did not immediately respond to a request for comment.

A report by agency’s Office of Inspector General released in July found that “management weaknesses" delayed federal intervention in the Flint water crisis after Michigan failed to prevent lead contamination.

The inspector general cited management problems at the EPA and its Region 5 office in Chicago, which oversees Michigan. Regional managers did not properly address state actions to "disinvest" in safe drinking water requirements dating back to 2010, concluding they were intended to be temporary and not affect public health, inspectors said.

The report, based on two years of research and in inquiries, also repeatedly noted the MDEQ holds primary responsibility for ensuring compliance with safe drinking water requirements.