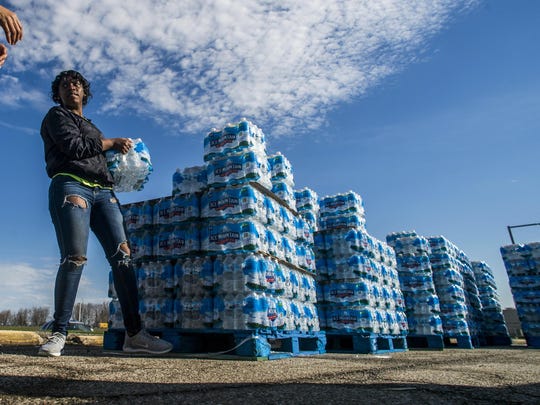 Katia Kenney, 18 of Flint, Mich., volunteers as she loads cases of water into vehicles as non-profit Pack Your Back distributes more than 37,000 bottles of water on Monday, April 22, 2019, at Dort Federal Event Center in Flint. (Photo: Jake May / AP)

Flint – State civil rights officials have produced a guide aimed at helping to teach lessons of the Flint water crisis as it marks five years.

The Michigan Department of Civil Rights released the guide Tuesday that officials hope promotes debate among students. It’s based on a 2017 report issued by the Michigan Civil Rights Commission finding decades-long “systemic racism” contributing to the lead-in-water crisis in the majority black city.

The guide contains definitions of “bias,” “racial disparities” and other terms. It also has “conversation starters,” including how the report reached its conclusions, and identifying examples of residents losing trust in government.

The department is encouraging its use among K-12 school districts and colleges.

The toxin was discovered in 2014 after officials tapped the Flint River for drinking water without proper treatment.