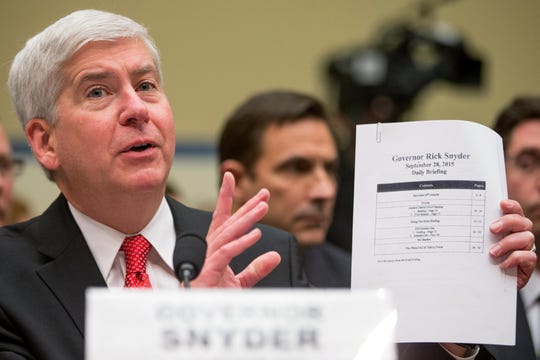 First reported by the Associated Press, the search warrants issued in May to the Department of Technology, Management and Budget and the Attorney General's Office sought the devices of 66 current or former state officials, including Snyder.

Solicitor General Fadwa Hammoud said the search warrants stemmed in part from the discovery of "substantial potential evidence that was not provided to the original prosecution team" in its investigation of Flint’s lead-contaminated water and a 2014-15 outbreak of Legionnaires’ disease.

"The team is currently in the process of obtaining this evidence through a variety of means, including search warrants," Hammoud said. "The team is also conducting a thorough review of existing and newly received evidence pertaining to the Flint Water Crisis.”

Hammoud's search warrants were issued, in some cases, for items already obtained by former special prosecutor Todd Flood and served on the solicitor general's own department. They illustrate the complicated interplay of changing administrations, new investigative leadership and the challenges of a conflict wall separating the criminal and civil sides of the Flint water crisis litigation.

Some of the evidence had already been obtained by Flood, but other items were never received by the investigative team, said Kelly Rossman-McKinney, a spokeswoman for the Attorney General's Office.

The items previously obtained by Flood's team had been stored in a specific section of the Attorney General's Office under former Attorney General Bill Schuette. Hammoud, who took over criminal prosecutions in the Flint water crisis in January, obtained the warrant to better search that division of the office, according to the Associated Press.

A warrant signed May 19 lists all content from Snyder’s cell phone, iPad and computer hard drive collected by the state as the Republican governor prepared to leave office in late 2018. The document indicated that an iPhone 6 Snyder previously used had already been searched, with non-privileged information turned over to the Office of Special Counsel.

Investigators are also seeking devices used by several former state officials that were encrypted in a way that prevented data extraction in the past, including an iPhone 5s used by ex- Department of Environmental Quality Director Dan Wyant and an iPhone 6 used by ex-Department of Health and Human Services Director Nick Lyon, who is preparing to stand trial on involuntary manslaughter and other charges.

All told, the warrant list referenced 33 employees in Snyder’s office, 22 in the health department and 11 in the former Department of Environmental Quality.

A second search warrant served on the Attorney General's Office sought Flint water crisis-related data stored through a service provider named KLDiscovery, including metadata such as the author field of certain communications, the name of the person who last saved a file, or the dates and times an email was sent and received.

A third warrant was issued the same day to the state Department of Technology, Management and Budget.

The warrant asked for mobile devices — including desktop and laptop computers, cell phones and tablets — that had been tagged for forensic review as part of the Flint water investigations from the governor’s office, the Department of Environmental Quality and the Michigan Department of Health and Human Services.

Earlier this year, Hammoud asked a judge for a delay in several criminal cases because investigators had found a "trove" of materials in the basement of a state building that had not been supplied to prosecutors when they had issued previous investigative subpoenas. The judge declined to suspend the cases for the full time period the solicitor general requested.

Hammoud fired Flood as special prosecutor in April shortly after the discovery of the records, roughly three years into his investigation and prosecution of government officials, including Lyon and Michigan's former Chief Medical Executive Eden Wells.

Christina Grossi, another lawyer in the Attorney General's Office, defended the department's and Flood's work in processing the voluminous records related to the Flint Water Crisis and argued they had not been neglectful.

Snyder became a focus of Flood's investigation after a top aide contradicted the Republican governor's statements to the U.S. House Oversight committee.

Snyder blamed DEQ officials for not telling him about lead-contaminated water, maintaining he did not know about Flint's elevated lead levels until shortly before he announced an action plan in October 2015. He also insisted that he did not learn about an outbreak of deadly Legionnaires’ disease until mid-January 2016.

The outbreak of Legionnaires' disease, a deadly form of pneumonia, killed 12 people and sickened dozens of others in Genesee County in 2014-15.

But Snyder's insistence didn't satisfy U.S. Rep. Elijah Cummings of Maryland and other Democrats, who insisted that they were missing unspecified documents from the Snyder administration. Cummings, who is now the House Oversight panel's chairman, asked at the beginning of the Whitmer administration and Attorney General's Office for Snyder-era Flint documents at the beginning of the year.

Snyder's office has said it provided the Oversight committee with tens of thousands of pages of records, in addition to documents from the state's attorney general, health and environmental departments.

Nessel's office "has already supplied the committee with tens of thousands of pages of documents, and we are diligently working to send the rest," Olsen told The Detroit News in April.