Authorities are searching a rural area where human remains were discovered 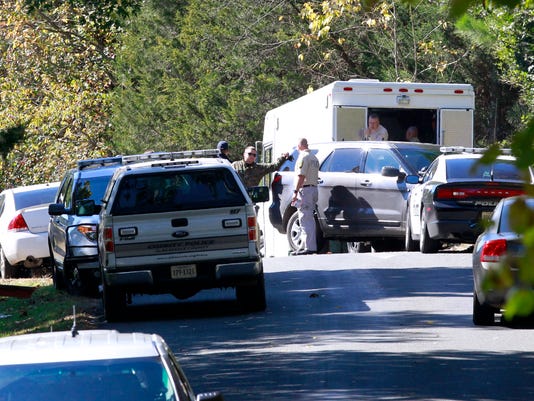 Charlottesville, Va. – — After finding remains that could be University of Virginia student Hannah Graham, authorities interviewed nearby residents and picked through leaves on the side of a sparsely populated highway, searching for any clues or evidence.

Forensic tests were needed to confirm whether the remains match the 18-year-old Graham. They were discovered by a deputy Saturday in a heavily wooded area of Albemarle County that is home to horse farms about 12 miles from campus. Graham disappeared Sept. 13 after a night out with friends.

Her parents were notified that the remains were found, Charlottesville Police Chief Timothy Longo said. It wasn’t immediately clear Sunday how long it would take for them to be identified. Investigators also wouldn’t say if they had found anything else.

The last person seen with Graham, 32-year-old Jesse Leroy Matthew Jr., has been charged with abduction with intent to defile Graham. He is being held in the Albemarle-Charlottesville Regional Jail. A preliminary hearing is set for Dec. 4.

The remains were discovered roughly 6 miles from where the body of 20-year-old Virginia Tech student Morgan Harrington was found three months after she vanished in 2009.

Police have said forensic evidence connects Matthew to Harrington’s killing, which in turn is linked by DNA to a 2005 sexual assault in northern Virginia. Matthew hasn’t been charged in those cases.

Graham met friends at a restaurant for dinner Sept. 12 before stopping by two off-campus parties. She left the second party alone and eventually texted a friend saying she was lost, authorities said.

In surveillance video, she can be seen walking unsteadily and even running at times, past a pub and a service station and then onto a seven-block strip of bars, restaurants and shops. On Sunday, the area was buzzing with people having brunch at outdoor cafes on a brisk, sunny day. Graham’s disappearance and the discovery of human remains was a frequent topic of conversation.

“It’s constant. It’s everywhere. It’s part of the zeitgeist of the community because of this just profound sense of loss and shock and horror. I mean it’s on everybody’s lips wherever I go - lunch, dinner, in the streets,” said Robert Robl, a Charlottesville resident who was having brunch.

Many people said they hoped the identification of the remains brings closure to Graham’s friends and family.

“Everybody was rattled. Everybody knew it was coming, but you still hope for the best. As much as you can prepare for it, you can never prepare for it,” said Claire Meyers, a University of Virginia nursing student who has friends who knew Graham and Matthew.

Matthew was an operating room technician at the university’s hospital, where Meyers works as a patient care assistant.

Albemarle County resident Bill Gnas, a retiree who lives a few miles from where the remains were found, said helicopters flew overhead Sunday morning and there had been a constant police presence in the area for 24 hours. When he saw police blocking off a road on Saturday, he suspected the worst.

“Truly, I was saddened by it. After three or four days you had to anticipate it was going to be another Harrington event where they were going to find the body, and the only thing you could hope for at that point was that there be some closure for the parents that it was in fact discovered,” he said.