Residents began cleaning up Wednesday from devastating flooding that slammed Arizona a day earlier, trapping people in vehicles and homes and destroying up to $2 million worth of inventory at a cactus nursery north of Phoenix. 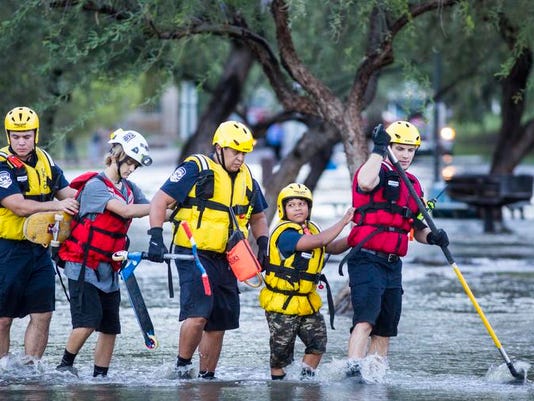 Phoenix – — Residents began cleaning up Wednesday from devastating flooding that slammed Arizona a day earlier, trapping people in vehicles and homes and destroying up to $2 million worth of inventory at a cactus nursery north of Phoenix.

The National Weather Service said some areas received more rain Tuesday than they had all last summer, and many residents were faced with a long recovery.

At Cox Cactus Farm, workers gathered and discarded flooded plants while tractors scooped up dirt at the nursery that caters to landscapers, resorts and golf courses.

Co-owner Jessica Cox said the farm lost between $1.5 million and $2 million worth of inventory and estimated it will take two years to fully recover from the storm. The owners basically have to rebuild and regrow their inventory from scratch, she said.

The floodwaters rose so quickly Tuesday morning that Cox’s husband had to climb on the roof of a greenhouse to escape. A worker retrieved him with a tractor.

Farther north, nearly 5 inches of rain fell around New River, the site of some of Tuesday’s most chaotic scenes.

Several homes in the town about 30 miles north of Phoenix sustained significant damage, and a helicopter rescued two women and three dogs from a residence surrounded by swift-moving water.

Some New River residents who live near a flooded wash spent Wednesday morning helping each other.

Susy Mister was gathering metal panels and fencing that belonged to her neighbor, who is out of town. Mister said she hasn’t yet been able to relay the extent of the damage.

A muddy pit filled with rocks, pieces of asphalt and mangled trees was all that was left of the neighbor’s circular horse pen.

New River resident Wayne Adams set out on foot at 6 a.m. with his dog in search of his utility trailer.

“It just disappeared,” said Adams, who uses the trailer to haul lumber and trash. “We went home, and now we’re back out again. I still hope we find it.”

Elsewhere in metro Phoenix and Tucson, a small trailer park was evacuated, a school was flooded, and first responders pulled motorists from partially submerged vehicles. There were no reports of deaths or serious injuries.

A river of muddy water rushed down I-17 about 25 miles north of Phoenix as motorists changed lanes to avoid the deluge. A stretch of freeway was shut down and reopened later in the day.

“It looked absolutely devastating,” said Gov. Jan Brewer, who was glued to the TV all day watching the rescues. “For the last 10, 15 years, we’ve never seen anything the likes of this.”

Parts of two other state highways that were closed because of flooding reopened Tuesday night, the Arizona Department of Transportation said.

In another dramatic rescue, authorities pulled an elderly woman from a van stuck in rushing floodwaters, a scene repeated across the region throughout the day as other motorists became trapped.

Kathy Mascaro said her typical 15-minute commute from home to work in the Phoenix area more than doubled because of traffic caused by the flooding.

“It’s crazy. You’d think, ‘How could the desert flood?’ But it really does,” Mascaro said.

“I’ve been here over 20 years, and it has never flooded this bad,” she said.

The desert around Phoenix sees little rain most of the year, so when major storms roll through, the water has nowhere to go.

“With so much rain falling so quickly, the water doesn’t have a chance to soak into the hard-packed rocky soil,” said meteorologist Gary Woodall of the National Weather Service.