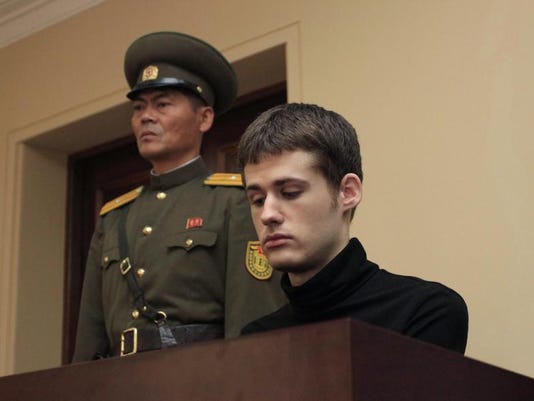 In this Sept. 14, 2014, photo, Matthew Miller, a U.S. citizen, sits on the dock at the Supreme Court during his trial in Pyongyang, North Korea. The court sentenced Miller to six years of hard labor for entering the country illegally and trying to commit espionage in the trial. South Korean border guards arrested another American man who they believe was attempting to swim across the border into rival North Korea, a South Korean defense official said Sept. 17, 2014. (Photo: Kim Kwang Hyon , AP )

The man was apprehended Tuesday night while lying on a bank of the Han River in a restricted military area near the border, said the official, who spoke on condition of anonymity due to office policy.

The man told investigators that he tried to go to North Korea to meet leader Kim Jong Un, South Korea’s Yonhap news agency reported, citing an unidentified government source. It said the man, aged around 29, is a computer repairman from Texas who came to South Korea 10 days ago.

Americans are occasionally arrested after entering North Korea illegally from China, but a U.S. citizen trying to get in from South Korea is unusual.

In the 1960s, several U.S. soldiers walked into North Korea while on a patrol near the mine-strewn Demilitarized Zone, or DMZ. Those army deserters later appeared in North Korean propaganda films and taught English there.

In 1996, American Evan C. Hunziker entered North Korea by swimming across the Yalu River that marks the Chinese border. Hunziker, who apparently made the swim on a drunken dare, was accused of spying and detained for three months.

Hunziker, 26 at the time, was eventually freed after negotiations involving a special U.S. envoy. The North Koreans wanted to slap Hunziker with a $100,000 criminal fine but eventually agreed on a $5,000 payment to settle a bill for a hotel where he was detained. He killed himself about one month after his release.

About 27,000 North Koreans have defected to South Korea to avoid poverty and political suppression since the end of the Korean War. Some South Koreans have attempted to defect to the impoverished, authoritarian North, but such cases are rare.

Last year, South Korean soldiers shot and killed a man with a South Korean passport who officials said ignored warnings while swimming across the Imjin River toward North Korea.

Some Americans recently detained in North Korea include missionaries aiming to spread the gospel or draw attention to human rights abuses. On Christmas Day in 2009, Korean-American missionary Robert Park defiantly walked into North Korea from China calling for the dismantling of the North’s prison camps. Park, who was deported from North Korea in February 2010, said he was tortured by interrogators.

North Korea is currently holding three Americans. The country’s Supreme Court sentenced one of them, Matthew Miller, on Sunday to six years of hard labor after finding him guilty of illegally entering the country to commit espionage. North Korea says Miller tore up his tourist visa upon arrival at Pyongyang’s airport in April.

The Korean Peninsula remains technically at war because the 1950-53 Korean War ended with an armistice, not a peace treaty. About 28,500 U.S. troops are stationed in South Korea to deter potential aggression from North Korea.