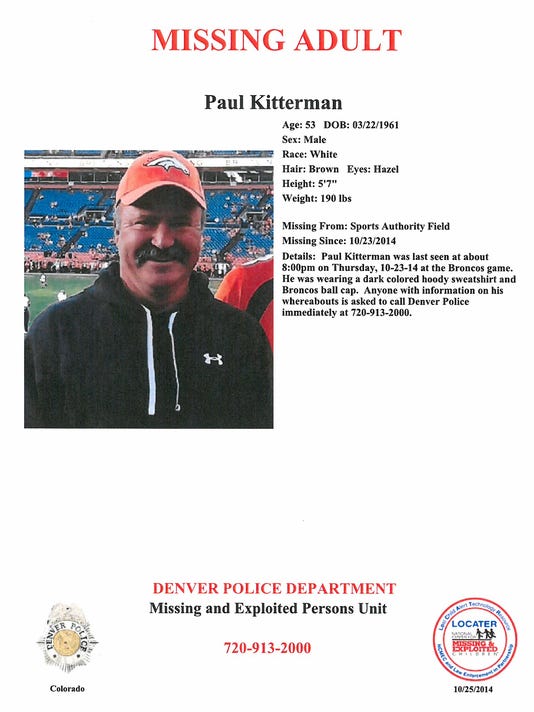 In this Oct. 2014 police missing person police flyer, made available by the Denver Police Department, Paul Kitterman, a fan who went missing from the Oct. 23, 2014 Broncos game, is pictured. Friends and family of Kitterman are asking the public for help finding him. (Photo: AP )

Denver — Relatives of a Broncos fan who went missing during last week’s game are wondering how a man with no known health or personal problems could seem to vanish without a trace.

Family and friends of 53-year-old Paul Kitterman have been searching for him since Thursday night’s matchup with the San Diego Chargers at Sports Authority Field.

His stepson, Jarod Tonneson, said he has not been seen since he left his seat to meet friends during halftime. Tonneson filed a missing persons report with Denver police, scoured the sprawling stadium, called local hospitals and detox centers and taped fliers around the city.

“We just don’t know what else to do,” Tonneson told The Associated Press on Monday. “Paul is a simple guy, he doesn’t like technology, he doesn’t get into drama. He’s just an easygoing guy.”

The two went to the game with two of their friends after a day spent working and hunting at another friend’s ranch in Kremmling, a small town in the mountains of northern Colorado.

Kitterman and Tonneson, both construction workers, hurriedly made the 100 mile trip to the stadium after a friend offered tickets. It was Kitterman’s first time there. In their haste, Kitterman forgot his cellphone, took no credit cards and very little cash.

Still, Kitterman had memorized his friends’ phone numbers and would have found ways to reach out if he wanted to leave. He had four or five beers in the course of a four-hour span, not enough to become disoriented, Tonneson said.

Denver police spokesman Sonny Jackson said detectives don’t suspect foul play, but he would not elaborate. He said police were trying to support the family in their search.

“They just don’t seem too worried about it being that he is a grown man,” Tonneson said.

His parents live in Arizona and his siblings in Missouri, but Kitterman has few contacts in the Denver area, Tonneson said.