A small plane has crashed at Wichita's Mid-Continent Airport 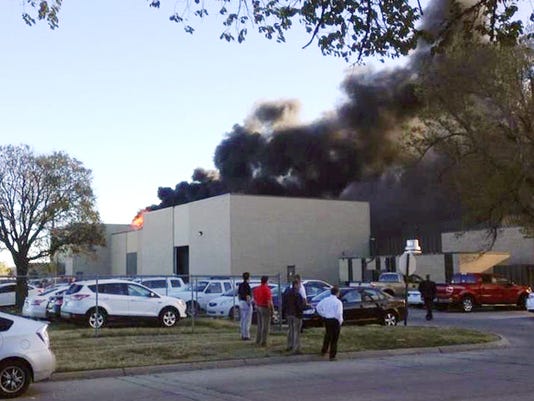 In the image from video provided by KAKE News, black smoke billows from a building at Mid-Continent Airport where officials say a plane crashed Oct. 30, 2014, in Wichita, Kan. (Photo: AP )

Wichita, Kan. – — A small plane lost power after takeoff and crashed into a building Thursday while trying to return to a Kansas airport, killing at least four people inside the building and injuring at least five others, officials said.

Only the pilot was on the plane, but it wasn't immediately clear how many people were in the building at Wichita Mid-Continent Airport, Fire Chief Ronald D. Blackwell said. Four people remained unaccounted for hours after the crash, but a search was halted at midday after a portion of the building collapsed.

Wichita Fire Marshal Brad Crisp assured onlookers the search would resume as soon as the building was deemed stable.

It appeared to strike the top of the building and ignite what Wichita Fire Chief Ronald D. Blackwell described as a "horrific" fire. Flames and towering plumes of smoke from the wreckage could be seen for miles around the city.

Ryan Weatherby said he and several other employees at Yingling Aviation, across the street from the airport, ran outside when they heard the crash and saw rolling black smoke and wreckage.

"It wasn't that loud. It was more like a screech or something," Weatherby said.

Jay Boyle, who works at the airport as a senior field technical adviser, said he saw people standing outside and pointing, then spotted the crash site.

"I could see from a distance the cutout in the side of the building where it looked like a wing had gone through and you could actually see the aircraft landing gear through a hole in the building," he said.

The crash did not appear to be significantly disrupting passenger traffic at the airport as planes could be seen taking off from other runways.

Located several mile west of downtown Wichita, a longtime aircraft manufacturing hub, Wichita Mid-Continent is used by private aircraft and served by several airlines and their regional affiliates, including American, Southwest, Delta, United and Allegiant. It saw more than 13,000 departures and about 1.4 million passengers last year, according to the U.S. Department of Transportation.