No Ferguson grand jury decision yet

Crews erected barricades around the building where a grand jury has been meeting.

No Ferguson grand jury decision yet 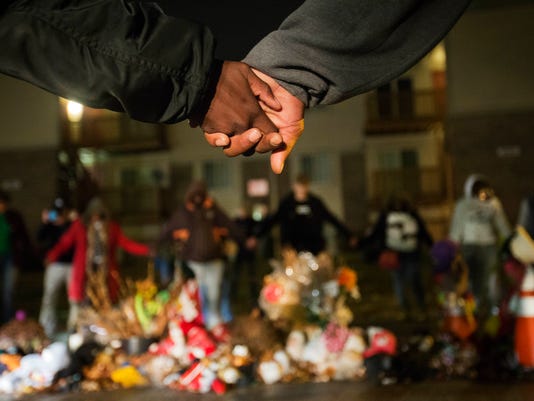 Protestors hold hands during a demonstration at a memorial more than three months after a black teen was shot and killed nearby by a white policeman on Saturday in Ferguson, Mo.(Photo: David Goldman / AP)

Ferguson, Mo. – — Crews erected barricades Saturday around the building where a grand jury has been considering whether to indict the Ferguson police officer who shot and killed Michael Brown, even as a grand jury decision seemed unlikely this weekend.

Tension has been mounting in Ferguson and elsewhere in the St. Louis area in recent days, with many speculating that the grand jury's decision would be announced on Sunday. That seemed increasingly unlikely by late Saturday, although there was a noticeable uptick in the preparations being made.

Downtown STL Inc., a St. Louis civic group that promotes downtown businesses, told members in an email Saturday that the grand jury will reconvene Monday to continue deliberating whether charges are warranted against Ferguson police Officer Darren Wilson in the Aug. 9 fatal shooting of Brown.

The email did not explain how the group knew the information, and a spokeswoman declined comment. Ed Magee, a spokesman for St. Louis County Prosecutor Bob McCulloch, didn't respond to several messages Saturday.

The Brown family's attorney, Ben Crump, said Saturday that he hadn't heard a decision had been reached and that prosecutors had promised to tell him when that happened.

Wilson is white and Brown, who was unarmed, was black. There have been many demonstrations in the months since Brown's death, including some that were violent. Police arrested three protesters on Friday night — the third straight night of unrest in Ferguson.

On Saturday, authorities set up barricades around the Buzz Westfall Justice Center in Clayton, which is where the grand jury has been meeting.

Barricades also went up in the shopping center parking lot on West Florissant Avenue in Ferguson, which was where police set up a makeshift command center in the immediate aftermath of Brown's death.

Several dozen protesters marched in Ferguson on Saturday evening, praying, playing music and chanting slogans including, "No justice, no peace" and "Mike Brown means, we've got to fight back." Cars stopped and drivers honked, slowing traffic.

Brown's mother, Lesley McSpadden, spoke to protesters through a bullhorn and urged people to be careful.

Several businesses in both Ferguson and Clayton have put boards on their windows.

Residents were on edge, too.

Jamie Freeman of Ferguson, 38, a registered nurse and mother of four, said she was especially concerned since her 20-year-old son lives in the neighborhood where Brown was shot.

"I just hope it stays peaceful," Freeman said of protests that will follow the grand jury decision. "We all have human emotions, but there's a way to do things, and violence, you can't get peace from violence."

Crump, the Brown family attorney, said the grand jury process is weighted against those shot by police officers.

The FBI has sent nearly 100 additional agents to Ferguson to help law enforcement agencies, according to a U.S. official who spoke on condition of anonymity because the official was not authorized to discuss the FBI plans.

But things were calm during the day on Saturday. Brown's father, Michael Brown Sr., joined a church group in passing out free turkeys to needy residents in the area where his son was shot. A day earlier, a video of Brown Sr. was released urging peace, regardless of how the announcement goes.