Obama joked the turkey pardon will be his “most talked about executive action this month.” 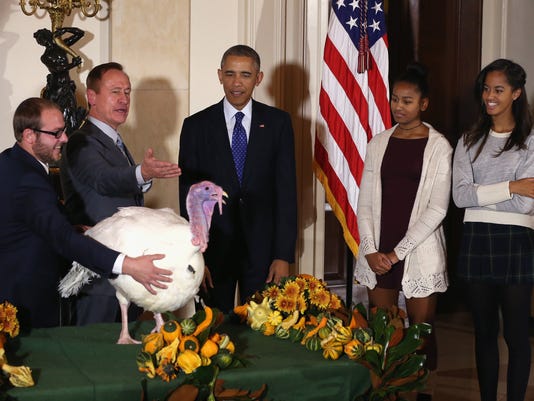 U.S. President Barack Obama (2nd R) stands after he pardoned "Cheese" and his alternate Mac (not shown,) both 20-week old 48-pound Turkeys, as his daughters Sasha (2nd R), Malia (R) and Cole Cooper (L) and his father National Turkey Federation Chairman Gary Cooper (2nd L) during a ceremony at the White House November 26, 2014 in Washington, DC. The Presidential pardon of a turkey has been a long time Thanksgiving tradition that dates back to the Harry Truman administration.(Photo: Mark Wilson / Getty Images)

Washington — President Barack Obama has issued an executive action that some of his Republican opponents may be hard-pressed to disagree with — sparing Thanksgiving turkeys from the dinner table.

In the spirit of the holiday, Obama on Wednesday took “action fully within my legal authority, the same kind of action taken by Democrats and Republican presidents before me,” to pardon the National Thanksgiving Turkey, a 49-pound bird named Cheese. He also spared an alternate turkey, a 47-pounder named Mac. Both came from Cooper Farms in Oakwood, Ohio.

“If you’re a turkey, and you’re named after a side dish, your chances of escaping Thanksgiving dinner are pretty low,” Obama said at the annual event, which drew international media coverage. He was accompanied by his daughters, Malia and Sasha, who declined his invitation to pet the birds. “No,” Malia said.

The ceremony was moved indoors because of cold, wet weather that blanketed Washington.

“So these guys are well ahead of the curve. They really beat the odds,” he said of Mac and Cheese.

Joking about his poultry action, Obama said: “I know some will call this amnesty. But don’t worry. There’s plenty of turkey to go around.” Later Wednesday, Obama was taking the family to a neighborhood food pantry to donate a pair of turkeys “that didn’t make the cut.”

Obama and his family distributed bags of food at Bread for the City, a center in Washington’s Southeast that provides food, clothing and other services to the poor.

At the pardoning ceremony, Obama referenced news reports that questioned the wisdom of the turkey pardon tradition and said “it is a little puzzling that I do this every year.” But Obama said he enjoys the tradition because “with all the tough stuff that swirls around in this office, it’s nice once in a while just to say ‘Happy Thanksgiving,’ and this is a great excuse to do it.’

Presidents as far back as Abraham Lincoln spared turkeys, according to the White House. President George H.W. Bush granted the first turkey pardon in November 1989.

The pair of barrel-chested birds that Obama said he was sparing from a “terrible and delicious fate” will live the rest of their feathered days at Morven Park’s Turkey Hill, a turkey farm in Leesburg, Virginia.