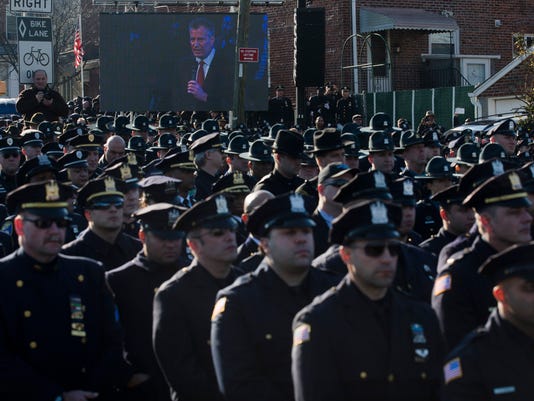 Police officers turn their backs as New York City Mayor Bill de Blasio speaks at the funeral of New York city police officer Rafael Ramos in the Glendale section of Queens, in New York. De Blasio also got some boos at a police graduation ceremony Dec. 29, 2014, that comes with tensions high between him and rank-and-file police.(Photo: John Minchillo / AP)

New York — New York City Mayor Bill de Blasio is getting some boos at a police graduation ceremony that comes with tensions high between him and rank-and-file police.

The cadets sat at attention when de Blasio spoke Monday at Madison Square Garden. But boos and heckles could be heard from some in the crowd where the graduates’ friends and families sat.

A few people in the crowd also turned their backs to the mayor. Most, however, applauded politely when he finished speaking.

Police union leaders have accused de Blasio of fostering an anti-NYPD atmosphere. They say it contributed to the killings of two officers earlier this month.

Many officers turned their backs to a video monitor showing de Blasio speaking at one of the slain officers’ funerals on Saturday.