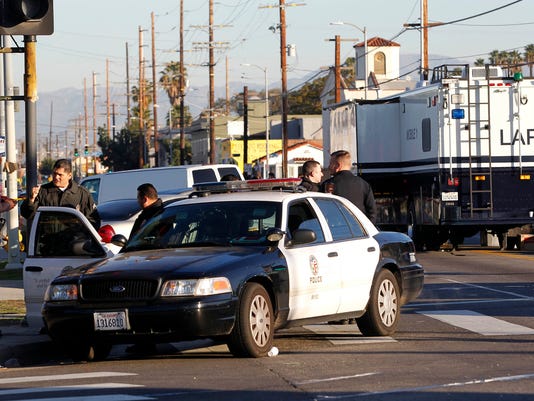 Los Angeles — A man fired a rifle at two Los Angeles officers in a patrol car, but no one was injured in the attack that comes amid tension nationwide between police and protesters rallying against their tactics.

LAPD spokeswoman Officer Nuria Venegas said Monday that one man was under arrest and a second suspect was being sought in the Sunday night shooting in South Los Angeles, an area of the city ridden with gangs and crime and heavily patrolled by police.

The two officers were responding to a radio call and driving slowly in the neighborhood around 9:30 p.m. when they saw the muzzle flash of a rifle pointed in their direction, Venegas said. The officers returned fire, but no one was hit.

The officers arrested one suspect and recovered a rifle.

Police searched the neighborhood throughout the night for the second suspect, warning nearby residents to stay in their homes. The search of the immediate area was called off early Monday morning.

Police did not say why the search was called off or whether they had determined a motive for the shooting, which follows weeks of protests in California and across the country against police killings of unarmed black men in Missouri and New York.

The subsequent shooting of two New York City officers in their patrol car has departments proceeding with caution, police said.

“Obviously, with what happened in New York and what we know is the sentiment right now nationwide, in the mornings or in the evenings when you put on your uniform, you’re very much aware that there are some currents of anger toward police,” Detective Meghan Aguilar told KABC-TV. “We’re aware that we could be a target for individuals that are angry at law enforcement right now.”

The New York gunman ambushed the officers and then killed himself after shooting and wounding an ex-girlfriend in Baltimore earlier that day and posting threats online, including references to the fatal shooting of 18-year-old Michael Brown in Ferguson, Missouri, and the chokehold death of Eric Garner in New York City. Both were killed by white officers.

Deputy Chief Bob Green told KNBC-TV at the scene of the Los Angeles shooting that “based on what’s going on in the national picture, tensions are very high, that’s not what we need. Whether or not this is related to that — too early to tell.”