Veronica J. Rutledge was shot by her 2-year-old son in an Idaho Wal-Mart 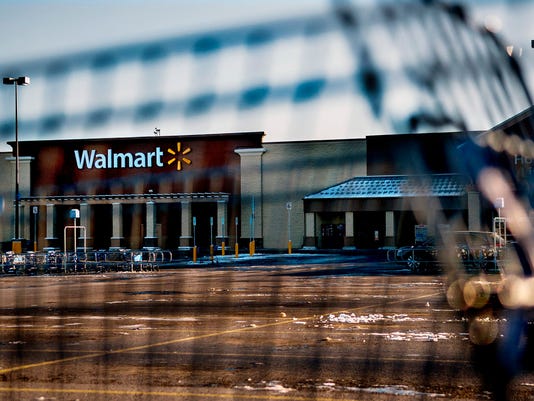 This photo shows Wal-Mart with a shopping cart in the foreground in Hayden, Idaho, Tuesday, Dec. 30, 2014. A 2-year-old boy accidentally shot and killed his mother after he reached into her purse at the northern Idaho Wal-Mart and her concealed gun fired, authorities said Tuesday.(Photo: Kathy Plonka / The Spokesman-Review)

Concealed weapons are part of everyday life in Idaho, and that’s unlikely to change in the Mountain West state despite a shocking accident in which a 2-year-old boy reached into his mother’s purse, grabbed her gun and shot her in the head inside a Wal-Mart.

Veronica J. Rutledge was shopping Tuesday morning with her son and three nieces in Hayden, Idaho, when the young boy got ahold of the small-caliber handgun. It discharged one time, killing her, Kootenai County sheriff’s spokesman Stu Miller said.

Miller said the boy, Rutledge’s only child, had been left in a shopping cart with the purse. The 29-year-old Rutledge had a concealed weapons permit.

About 7 percent of adults in Idaho had concealed weapons permits at the end of 2012, according to the Crime Prevention Research Center in Swarthmore, Pennsylvania. That ranked Idaho among the top third of states.

Kootenai County, which has about 140,000 residents, has issued close to 16,000 concealed weapons permits, Miller said Wednesday.

“It’s very commonplace in northern Idaho for folks to have a concealed weapons permit,” Miller said, and most businesses do not prohibit firearms.

Guns were a big part of Rutledge’s life.

“She was not the least bit irresponsible,” her father-in-law, Terry Rutledge said, in a brief interview with The Associated Press. He complained about people using the incident to attack his daughter-in-law.

Veronica Rutledge lived in Blackfoot, in southeastern Idaho, and her family had come to the Hayden area to visit relatives for Christmas.

She was an employee of the Idaho National Laboratory near Idaho Falls, Idaho, where she was a nuclear scientist. The laboratory supports the U.S. Department of Energy in nuclear and energy research and national defense.

“We’re deeply saddened by this tragedy,” said Nicole Stricker, a spokeswoman for the lab.

Rutledge graduated from high school in Harrison, a lakeside town in the Idaho Panhandle. She was the valedictorian of her class. She graduated from the University of Idaho with a degree in chemistry.

She had taken the children to Wal-Mart on Tuesday morning to spend their Christmas gift cards, family members said.

Responding deputies found Rutledge dead in the electronics section of the Wal-Mart in Hayden, a rural town of about 12,000 people 40 miles northeast of Spokane.

Colt Rutledge, 32, arrived to the store in Idaho’s northern panhandle shortly after the shooting around 10:20 a.m. Tuesday, Miller said. All the children were taken to a relative’s house.

Like other Western states, gun rights are a big issue in Idaho. State lawmakers passed legislation earlier this year allowing concealed weapons on the state’s public college and university campuses.

Despite facing opposition from all eight of the state’s university college presidents, lawmakers sided with gun-rights advocates who said the law would better uphold the Second Amendment.

Terry Rutledge told AP that his daughter-in-law “was a beautiful, young, loving mother.”

“She was taken much too soon,” he said.