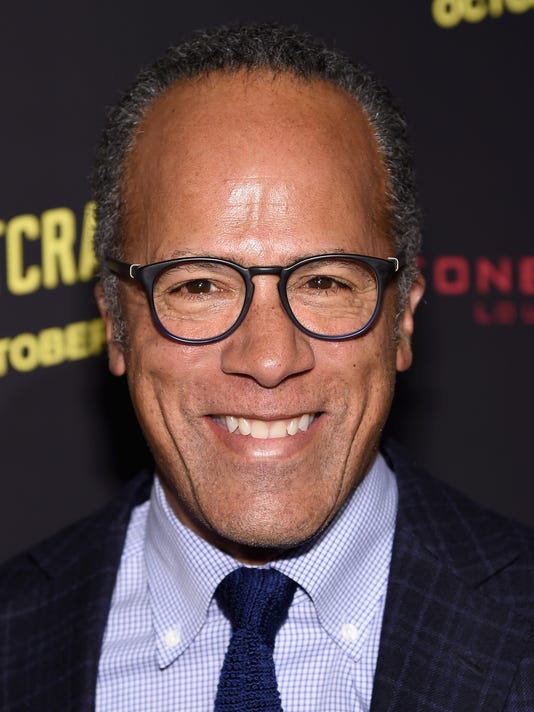 New York – — In the hallways at NBC headquarters here, the walls are adorned with photos of “Nightly News” anchor Brian Williams covering stories around the world, underscored by snippets from a recent ad campaign: “He's been there. He'll be there.”

Not anymore. Lester Holt is now in the anchor chair as Williams serves a six-month suspension for his misstatements regarding his role in a helicopter incident while covering the U.S. military invasion in Iraq. Holt reported on the suspension handed down Tuesday and followed it up with a personal remark aimed at comforting the viewers of the No. 1 evening news broadcast.

“Brian is a member of our family but so are you, our viewers, and we will work every night to be worthy of your trust,” Holt said.

Holt now finds himself thrust into an heir apparent position as NBC News grapples with serious questions about whether Williams can return. His name has been removed from the opening titles of “NBC Nightly News.”

“Six months without pay leads a lot of people within this building to ask whether Brian will ever come back,” Joe Scarborough said Wednesday on his MSNBC program “Morning Joe.”

If Holt, 55, gets the big job, it won't be the first time his career has been propelled forward by circumstances beyond the control of his employer, and he's by all accounts been up to the task.

Holt grew up near Sacramento, Calif. He worked as a correspondent for WCBS-TV in New York and KNXT in Los Angeles in the early 1980s. He got his big break as an anchor in response to a protest by the Rev. Jesse Jackson.

WBBM-TV, the CBS station in Chicago, had fired longtime anchor Harry Porterfield, the only African-American the CBS-owned station had on the air on a daily basis, in 1986. Months of ugly demonstrations were led by Jackson in front of the station's studios in the Streeterville neighborhood on the city's north side.

The hiring of Holt was a condition of a settlement between CBS and Jackson's Operation PUSH, and he remained at the station for the next 14 years. Although his broadcast fared poorly in the ratings, he did his best to learn the city where viewers can be unforgiving of TV newscasters who arrive from outside the market.

“He was a very quick study,” said veteran Chicago media critic Robert Feder. "He made friends in the newsroom fast and won them over through hard work and solid, credible reporting. He earned their respect as a real journalist."

The description appears to apply to every phase of Holt's career at NBC News, according to former and present colleagues.

In 2000, Holt moved east to work in the swamps of Secaucus, N.J., where NBC News based its cable channel MSNBC as a competitor to CNN. During the 2000 election Florida recount, Holt was the anchor for hours of continuous MSNBC coverage.

It was during the U.S. invasion of Iraq in 2003 when tragedy befell NBC News correspondent David Bloom. He died of a pulmonary embolism while traveling embedded with the U.S. 3rd Infantry Division as it headed to Baghdad.

Holt was called across the Hudson River to succeed Bloom as co-anchor of the weekend edition of “Today.” In 2007, he added “NBC Nightly News” anchor to his weekend duties, succeeding John Seigenthaler. Holt became the anchor of newsmagazine “Dateline NBC” in 2011.

Holt was not made available by NBC News for an interview. But he's known to have a passion for jazz and plays the stand-up bass. Like Williams, he's an aviation buff. One of his two sons, Stefan, is now a local morning news anchor on the NBC-owned TV station in Chicago.