For much of South, no relief from winter storm

Low temperatures refroze ice Wednesday, making roads as hazardous as they were during the storm’s height.

For much of South, no relief from winter storm 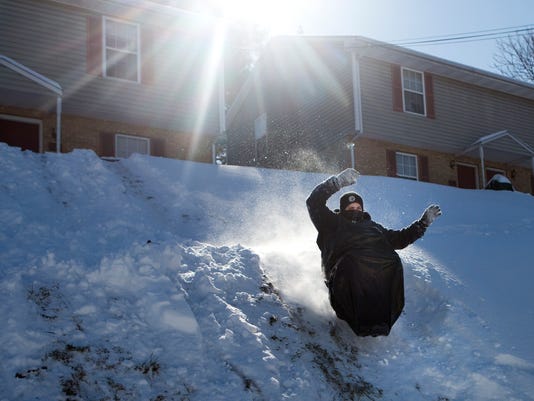 Durham, N.C. — For the South, the storm that dumped a foot of snow in some places was only the beginning. Low temperatures gripped the region Wednesday, freezing and refreezing the snow and ice and making the roads as hazardous as they were during the height of the storm. In many areas, the cold was expected to stay for days.

The refreeze has already played out over and over in New England, where mountains of snow are piled high. Here’s a look at how people are handling the winter weather:

Boston residents overwhelmed by massive snowfalls the last month have been recording videos of themselves jumping out of windows and into snowbanks, and Mayor Marty Walsh wants them to cut it out.

Walsh chastised thrill-seekers who’ve been filming themselves performing the frosty feat and then posting the videos on social media websites.

Walsh says, “It’s a foolish thing to do, and you could kill yourself.”

There appears to be no end in sight to the commuting woes in greater Boston, which has seen unprecedented snowfalls totaling nearly 8 feet this winter.

Transit officials warn the system won’t run normally for at least a month — and much longer if the region is hit with more significant snowfall. Areas of southern New England could see light snows Wednesday and Thursday; forecasters are also eying another storm this weekend.

The MBTA has been severely hampered by persistent snow and ice, leading to long delays and outright cancellations for commuter, subway and even Amtrak trains for much of the past three weeks. Highways are also jammed with more cars than usual in the notoriously traffic-clogged region as riders try and avoid the transit problems.

Here’s an upside to all this snow: It was so deep in Troy, New Hampshire, that residents were finally able to capture a black Labrador retriever that had been on the lam for three years.

The wily female pup, who’s 3 or 4 years old, had been spotted regularly, but nobody could get close enough for a grab. That changed on Sunday night when Courtney Davis and his girlfriend, Tiffany Bennett, spotted her running from an abandoned trailer. Hampered by deep, fluffy snow after a series of heavy storms, the dog couldn’t get away again.

Carl Patten Jr., who’s been keeping the pooch in his heated garage since then, said Tuesday that he’s using two collars on her: one a harness and the other around her neck, just to be safe.

Massachusetts officials are stepping up warnings about the potential for roofs to collapse under the weight of snow that has built up in recent weeks.

Public Safety Commissioner Thomas Gatzunis said owners of residential and commercial buildings should be aware of signs of stress on roofs, including ceilings that are sagging or developing cracks.

Other signs could include popping or cracking sounds from the roof or attic area, and doors or windows that either won’t open or suddenly open on their own.

Numerous partial roof collapses have been reported in the state — including at a Kmart store and a high school — but no serious injuries as of Wednesday.

The Baltimore City Department of Public Works says crews are struggling to keep up with water outages caused by frozen pipes as bitter cold continues to grip central Maryland.

Maintenance crews from the Bureau of Water and Wastewater are working 12-hour shifts to deal with outages caused by leaks and breaks in water mains. The department has also hired private contractors to help with the workload.

The department has gotten more than 1,000 calls since Sunday reporting outages.

If there was a theme for this year’s Mardi Gras costumes in New Orleans, it was “Brrrrr.”

Despite the chilly temperatures, the crowds were thick Tuesday. Tutus were worn over jeans and many costumes, such as clowns or animals, were baggy enough to cover sweat shirts.

“My angel wings have tequila in them,” she said, showing the mouthpiece of a hydration backpack covered by the wings.

The winter storm that buried Kentucky in snow has prompted Gov. Steve Beshear to issue two executive orders aimed at protecting consumers from price gouging and making sure families have access to needed prescription medicines.

Beshear said Tuesday the orders are meant to ensure Kentuckians pay fair prices for products like gasoline and won’t have to worry about skipping doses of medicine.

More than a foot of snow fell in some areas Monday, and up to 2 more inches were forecast for Wednesday.

Temperatures were expected to fall throughout Wednesday into single digits, with wind chills of up to 15 below. Temperatures on Thursday were forecast to be even lower.

While most of the snow, sleet and freezing rain have stopped falling in North Carolina, temperatures will continue to plummet, creating a new challenge for thousands of residents who have lost power.

Gov. Pat McCrory urged more counties to consider setting up shelters for displaced residents and the homeless — but he discouraged residents from using unsafe sources of heating within their homes, such as charcoal.

A bicyclist died Wednesday morning after being hit by a state snow plow in suburban Richmond. Police were still looking into the circumstances.

Warmth in the west

While much of the rest of the country shivered, the Pacific Northwest experienced a different kind of February, with record-breaking high temperatures. Flowers blossomed, bees buzzed, and the sky was blue. Temperatures have crept north of 60 degrees. Forecasters said the high pressure ridge responsible for the summerlike weather might weaken enough by Wednesday for some clouds and a chance of drizzle