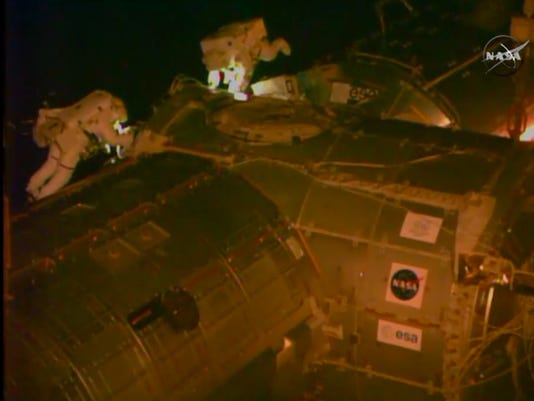 In this image from NASA television, astronaut Barry "Butch" Wilmore, left, and Terry Virts during their second spacewalk outside the International Space Station Feb. 25, 2015.(Photo: AP)

Cape Canaveral, Fla. — NASA astronauts ventured back outside the International Space Station on Wednesday for more cable work and a lube job.

It was the second spacewalk in five days for Butch Wilmore and Terry Virts. In all, three spacewalks are planned in just over a week to prepare the orbiting lab for future American crew capsules.

Wilmore and Virts installed two more power and data cables, for a two-day total of 364 feet. They unreeled the first eight cables Saturday.

Next up, for Virts, was the lubrication of the latches and brackets on the end of the space station’s giant robot arm. The snares have gotten a bit creaky over the past year, according to NASA.

Wilmore, the space station’s commander, took a moment to savor the view. “I don’t think I’ve seen blue that blue,” he observed as the complex soared 260 miles above the Caribbean.

By the end of their third spacewalk scheduled for Sunday, the astronauts will have routed 764 feet of cable on the station’s exterior. NASA considers it the most complicated cable job ever at the 16-year-old orbiting outpost.

The extensive rewiring is needed in advance of this year’s arrival of a pair of docking ports, designed to accommodate commercial crew capsules still in development. NASA expects the first port to arrive in June and the second in December.

SpaceX and Boeing are designing new capsules that should start ferrying station astronauts from Cape Canaveral in 2017. Manned flights have been on hold at the cape since NASA’s shuttles retired in 2011. SpaceX already is launching station cargo.

NASA has contracted out space station deliveries so it can concentrate on getting astronauts farther afield in the decades ahead, namely to Mars.