American astronauts will venture back out for a spacewalk this weekend, despite a helmet water leak 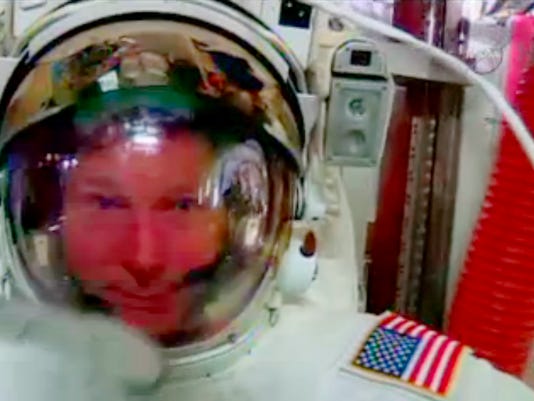 In this file image made from video provided by NASA, astronaut Terry Virts points to his helmet as he sits inside the International Space Station on Feb. 25, 2015, during an inspection for water in his suit.(Photo: AP)

Cape Canaveral, Fla. — American astronauts will venture back out for a spacewalk this weekend, despite a helmet water leak on their previous trip outside the International Space Station.

NASA on Friday cleared astronaut Terry Virts’ spacesuit for the last of three spacewalks to install cable. Mission managers believe they understand the quirks with this older suit and insist it is safe to use for Sunday’s spacewalk.

In 2013, another astronaut nearly drowned because of a flooded helmet. On Wednesday, the amount of water seepage in Virts’ helmet was significantly smaller and occurred at the end of the spacewalk when Virts was already inside.

Kanelakos said the latest leak was the result of condensation that occurred during the air lock repressurization. There have been seven other similar instances on this particular suit, he said.

Virts estimated the amount of water in his helmet Wednesday at one-half of an ounce. That did not include the water that moistened the absorbent pad at the back of his head, or that might have escaped when his helmet was removed.

As much as 2 ounces of water could condense like this and get into the helmet without causing a problem, Kanelakos said.

Virts and Wilmore are in the process of routing hundreds of feet of cable, needed before the arrival of new docking ports later this year that will be used by crew capsules still under development by Boeing and SpaceX. NASA expects these commercial capsules to start ferrying station astronauts in 2017.

During Sunday’s spacewalk, the astronauts will install another 400 feet of cable as well as two antennas. About 364 feet of power and data lines were laid during the first two spacewalks, last Saturday and Wednesday.

Kanelakos noted that this series of complicated spacewalks is “the most that we’ve ever done in a row since space shuttle.”

NASA wants to wrap up the work as soon as possible; that’s because Wilmore’s 5½ -month mission ends March 11.