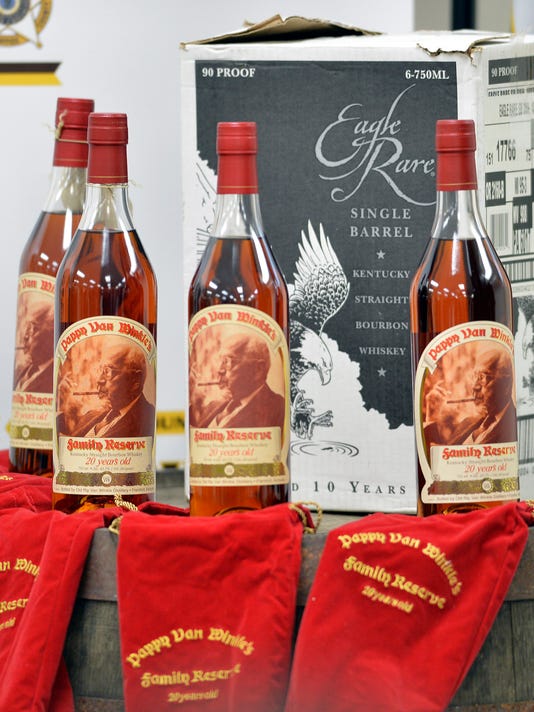 Recovered bottles of 20 year-old Pappy Van Winkle bourbon and Eagle Rare single barrel bourbon are shown during a news conference at the Franklin County Sheriff's Office, April 21, 2015, in Frankfort, Ky. Nine people were indicted relating to the theft of more than $100,000 worth of bourbon from the Wild Turkey and Buffalo Trace distilleries.(Photo: Timothy D. Easley / AP)

Frankfort, Ky. — A bourbon theft ring targeting the Buffalo Trace and Wild Turkey distilleries operated for years as a lucrative business, involving tens of thousands of dollars in whiskey, and the scheme began to unravel only when stolen barrels were discovered behind a shed, officials said.

The man accused of leading the ring was a rogue distillery employee — Gilbert “Toby” Curtsinger — who wore shirts promoting Buffalo Trace as he delivered the purloined barrels covered by a tarp in a pickup truck, according to authorities.

“He made a lot of money off of it,” Franklin County sheriff’s detective Jeff Farmer said.

Curtsinger was among nine people indicted Tuesday on charges of spiriting away large volumes of whiskey, by the bottle and the barrel since 2008.

Curtsinger often relied on go-betweens to find customers, and some middle men are among the people under indictment, Farmer said. The group often made connections through softball tournaments, he said.

“You had some rogue employees who took advantage of both the trust of their companies and their knowledge of the security measures to steal the barrels and bottles of bourbon from these two distilleries,” said Zachary M. Becker, an assistant Franklin County prosecutor.

Sheriff Pat Melton estimated the recovered whiskey alone is worth at least $100,000.

All nine defendants are charged with engaging in organized crime as members of a criminal syndicate.

Two worked at the Buffalo Trace distillery, and one worked at Wild Turkey, authorities said.

Curtsinger would present himself to customers as a Buffalo Trace employee and never gave any indication the whiskey was stolen, Farmer said.

“He never beat around the bush about who he was,” the detective said.

Sometimes he sold a barrel to a middle man, who then marked it up a couple hundred dollars and resold it, Farmer said.

In one instance, a go-between connected Curtsinger with a pair of farmer-brothers in Harrison County, Farmer said. An early transaction was for a bottle of hard-to-get Pappy Van Winkle whiskey.

“That led into, ‘Hey, he’s also got some barrels of whiskey for sale,’” he said.

Curtsinger delivered two barrels to the brothers, the detective said. Authorities found the barrels, one nearly empty, in a hunting trailer, he said.

Stolen barrels were stashed, sometimes in a barn, until customers were found.

The indictments tied together the theft of barrels of Wild Turkey whiskey revealed this year and the disappearance of Pappy Van Winkle bourbon dating back to 2008 or 2009. Pappy Van Winkle is made at the Buffalo Trace distillery.

The heists included more than 20 cases of Pappy Van Winkle bourbons, 50 to 70 cases of Eagle Rare bourbon and other barrels of whiskey that were stolen but not recovered, Becker said.

“We did have several calls and we had people come forward and say, ‘Hey, I think I got one of these barrels,’” Melton said Tuesday.

The investigation accelerated this year when authorities found several bourbon barrels by a shed behind Curtsinger’s home in Franklin County.

Curtsinger was arrested and has pleaded not guilty to multiple offenses, including receiving stolen property over $10,000. Curtsinger also is accused of trafficking in anabolic steroids. His wife, Julie Curtsinger, was also indicted.

Attorneys for the Curtsingers said they are in the early stages of preparing a defense.

In a joint statement, Buffalo Trace and Wild Turkey said they cooperated fully and thanked investigators.

Kentucky is home to about 95 percent of the world’s bourbon production, according to the Kentucky Distillers’ Association.