The death of Freddie Gray, a Baltimore man critically injured while in police custody, has sparked citywide protests 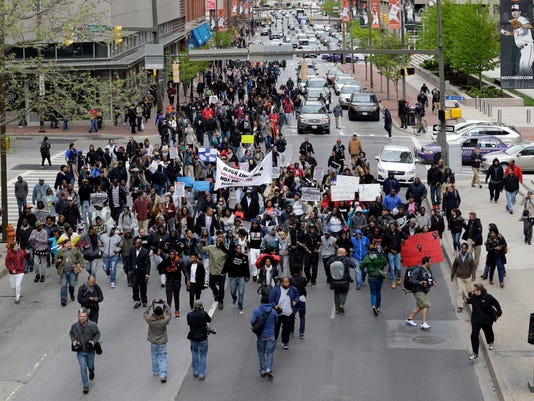 Protestors march for Freddie Gray through downtown Baltimore, Thursday, April 23, 2015. Gray died from spinal injuries about a week after he was arrested and transported in a police van. (AP Photo/Patrick Semansky)(Photo: Patrick Semansky / AP)

Baltimore — Protesters marching in support of Freddie Gray briefly scuffled with police, shouting at them and throwing objects.

Baltimore Police said on their Twitter feed that at least two people were taken into custody for disorderly conduct and destruction of property. The protesters also surrounded a police transport van, similar to the one Gray was put in after he was arrested.

Police formed a barrier around the van and it was able to leave the area. The march carried on.

It has lasted for a couple of hours, shutting down rush hour traffic. Protesters have grown increasingly agitated.

Gray fled on foot and was captured on April 12 after an officer "made eye contact" with him outside a public housing complex, police said. Videos show Gray screaming on the ground before being dragged, his legs limp, into a van. Witnesses said he was crying out in pain.

Police procedures also require officers to get immediate medical help if detainees need it, and to avoid aggravating any injury.

In Gray's case, he repeatedly asked for help during the trip, but the driver instead diverted to another location to pick up another prisoner, and paramedics weren't called until after they arrived at a police station 40 minutes later.