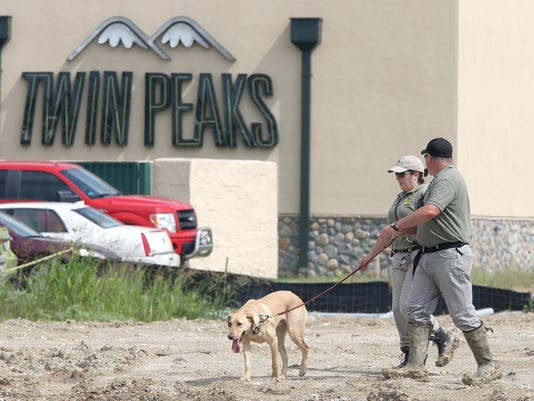 Authorities search a vacant lot near the Twin Peaks restaurant May 18, 2015, in Waco, Texas. About 170 members of rival motorcycle gangs were charged with engaging in organized crime Monday, a day after a shootout at a Twin Peaks killed nine people and wounded 18. Some civil rights activists and media critics are wondering about the differences between public perceptions of the fatal violence in Waco, Texas, and protests in Baltimore and Ferguson, Missouri, over police killings of black men.(Photo: Jerry Larson / AP)

Washington — The prevailing images of protests in Baltimore and Ferguson, Missouri, over police killings of black men were of police in riot gear, handcuffed protesters, tear gas and mass arrests. The main images of a fatal gun battle between armed bikers and police in Waco, Texas, also showed mass arrests — carried out by nonchalant-looking officers sitting around calm bikers on cellphones.

The firefight in Waco is raising questions about perceptions and portrayals of crime in America, considering the vehement reaction that the earlier protests got from police, politicians and some members of the public.

Unlike in Ferguson and Baltimore, where protests went on for days, there was no live news coverage of the Waco shootout. And yet the incident at a Texas restaurant hasn’t been used as a bridge to discuss other issues about families, poverty and crime, media critics, columnists and civil rights activists say.

They complain that there appears to be little societal concern about the gunplay at a restaurant in Texas, whereas politicians — including President Barack Obama — described violent looters in Baltimore as “thugs,” and the media devoted hours of television and radio airtime to dissecting social ills that affect the black community.

On Twitter, #wacothugs and #whiteonwhitecrime were trending, with columnists around the nation debating the differences. “So the mainstream media refuses to talk (hashtag)WacoThugs, huh? No panel discussion on their childhood? Fatherless homes?” radio and TV commentator Roland Martin said on Facebook. The Atlantic’s Ta-Nehisi Coates tweeted sarcastically, “Why won’t America’s biker gangs be more like Dr. Martin Luther King?”

The shootout at a Twin Peaks restaurant in Waco left nine people dead and 18 injured. About 170 bikers have been charged with engaging in organized crime, with bond at $1 million for each suspect. Mug shots show an array of suspects: white, Hispanic, a white woman and a man who looked black.

Police said the fight started because a vehicle rolled over a man’s foot. That caused a dispute that continued inside the restaurant, where fighting and then shooting began, before the violence spilled back outside, they said. Police said Wednesday about 1,000 weapons were recovered from the scene, but later revised that to 318 “and still counting,” including an AK-47 assault rifle, handguns, knives, brass knuckles, clubs and chains.

Officials said the nine dead were Bandidos and Cossacks members, ranging in age from 27 to 65. Preliminary autopsy results showed all nine were killed by gunshots.

Police have acknowledged firing on armed bikers, but it was unclear how many of the dead were shot by gang members and how many were shot by officers.

There were no deaths during the Baltimore and Ferguson protests, yet people immediately stereotyped all of the protesters as criminals, said Nicole Lee, a human rights lawyer who worked with protesters in both cities.

“Nine people were killed in Waco, and yet you have not heard the level of disgust and dismay as you did over fires burning in Ferguson and in Baltimore,” Lee said.

A motorcycle gang shootout in Texas has elevated security concerns for the upcoming Sturgis Motorcycle Rally in South Dakota.

The annual rally draws hundreds of thousands of motorcycle enthusiasts to South Dakota’s Black Hills. Organizers are expecting up to 1 million people for the 75th anniversary event in early August.