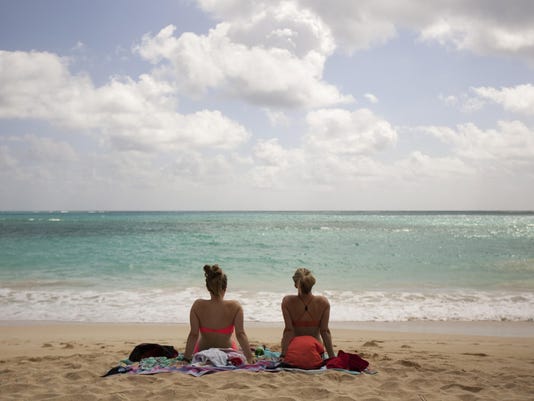 In this May 19, 2015 photo, Ali Junell, of Portland, Ore., left, and Kristen Carmichael, of Los Angeles, sit on the beach at Waimanalo Bay Beach Park in Waimanalo, Hawaii. The beach was listed as No. 1 on the 2015 list of best beaches, a list compiled annually by Florida International University Professor Stephen Leatherman, also known as Dr. Beach.(Photo: Caleb Jones / AP)

Honolulu — As the sun rises over the Pacific Ocean, Waimanalo Bay's powdery white coral sand glows in the morning light. A few people lounge in the sand as a fisherman casts his line into the turquoise water.

On Thursday, Waimanalo Bay Beach Park was named the top beach on an annual top 10 list of U.S. beaches compiled by a coastal science professor known as Dr. Beach.

Waimanalo Bay Beach Park beat out Barefoot Beach in Florida as the top pick for 2015, according to Dr. Beach. In recent years Leatherman has given extra points to beaches that have good safety records and no-smoking rules.

"Cigarette butts are the number one form of litter on beaches — plastics in terms of volume but in terms of numbers it's cigarette butts — so I'm starting to give beaches extra credit for no smoking," Leatherman said in a telephone interview Monday.

Leatherman said he has been to beaches where he counted 10 cigarette butts in a square meter, but smoking is illegal on beaches in Oahu, giving the island a boost on the list.

Leatherman cited Waimanalo's unassuming location, on a single-lane road in a rural stretch of the windward coast of Oahu, as another reason for its selection as the best of 2015. It's located in a quiet town near an Air Force base, far away from the busy streets of Waikiki. 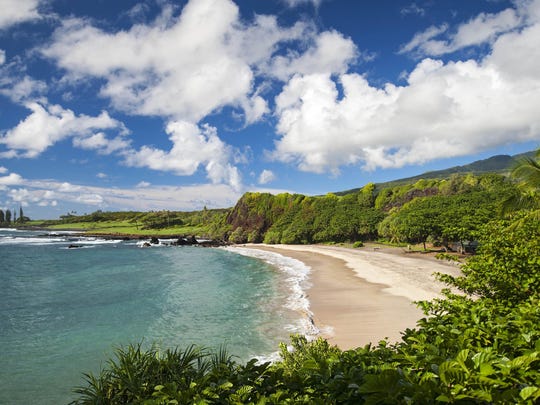 This undated photo provided by Travaasa Hana shows Hamoa Beach, in Maui, Hawaii. The beach was listed as No. 4 on the 2015 list of best beaches. (Photo: Travaasa Hana / AP)

"It's a beach that a lot of people don't know much about," Leatherman said. "I think it's one of those little gems . a lot of, shall we say, tourists — people from out of state — miss it all together."

Leatherman, who visits all the beaches on his lists, said Waimanalo Bay Beach Park is one of the longest in Hawaii and is the longest on the island of Oahu.

"If you're into beachcombing, you've got plenty of beach to walk on," he said.

Clean water and sand were important factors for Leatherman in deciding this year's best beaches. Safety and environmental management were also key components. Waimanalo Bay Beach Park has lifeguards on duty and the water is not very deep or treacherous, Leatherman says.

"There are a lot of beaches in Hawaii that are absolutely gorgeous but not very safe," he added.

Phillip Quiton Jr., a Native Hawaiian who was born and raised in Kaneohe, Hawaii, was fishing with friends Warrick and Warren Kekauoha on Waimanalo Bay on Tuesday.

He said he comes to the beach a lot to fish, but never to surf. "There isn't much surf here," he said of the relatively calm blue waters.

But it's good for fishing, he said. "Nobody else is here, I guess for whatever reason they believe there isn't much fish." A few minutes later one of his friends landed a bonefish.

Quiton said the ease of access and rock-free sand are other factors for frequenting this particular stretch of shore.

Ali Junell, of Portland Oregon, and Kristen Carmichael, of Los Angeles, were lounging on the beach near the three fishermen on Tuesday. They were told about the spot by a friend who lives and works nearby.

"There's no one here," Junell said. "It's pretty empty and the waves aren't overwhelming."

"It's nice to be at a beach with blue water that you can get in if it gets too hot," she added.

Hamoa Beach on Maui also made this year's list, joining beaches in Florida, Massachusetts, the Carolinas and California to round out the top 10.

Hawaiian beaches have won the top beach designation 14 of the 25 years Leatherman has published the list.

This undated photo provided by the Cape Cod Chamber of Commerce shows Coast Guard Beach on Cape Cod in Massachusetts. The beach was listed as No. 7 on the 2015 list of best beaches. (Photo: Margo Tabb / Travaasa Hana)

Up until now, any beach that won the top spot on Dr. Beach's list was retired and became ineligible for inclusion in subsequent years. Great Lakes beaches have been featured in previous years.

However, Dr. Beach says after 25 years of publication, next year he will clear the slate and allow any beach in the nation to once again be eligible for the contest and for the top pick.

"I'm going to start all over next year," he said. "This is the end of a 25-year, quarter century run and every beach is eligible again next year."