Protesters were detained Saturday night in a new get-tough policy after about 100 demonstrators confronted officers. 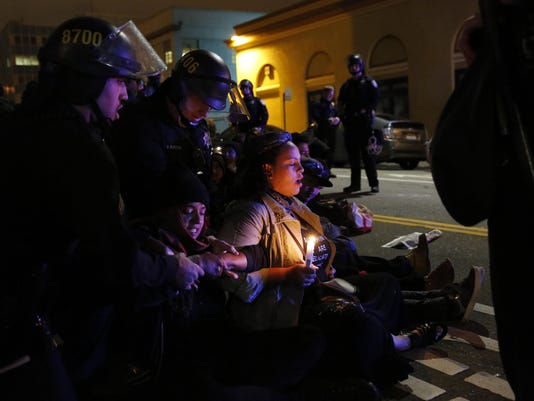 Police grab protester Erika Bell, left, for an arrest from sitting arms linked, with Alicia B. during a rally and march in Oakland, Calif. About 100 people took to the streets in Oakland on Saturday night to protest against what they said was the city's crackdown on nighttime demonstrations.(Photo: Leah Millis / AP)

Oakland, Calif. — Authorities acting under a new get-tough policy for monitoring street protests arrested or cited dozens of demonstrators for ignoring police orders to end a demonstration in Oakland.

The Oakland Tribune reported Sunday (http://tinyurl.com/m7gnjad ) that police cited a new policy by the city’s mayor to force protesters from the street to the sidewalk after Oakland experienced several violent demonstrations in the past year. Oakland has hosted rallies in the streets for years, but the mayor said the new policy is needed to combat damage to property and violence.

Mayor Libby Schaaf said earlier that existing policies and laws allows police to clear streets of protesters. Many businesses along the city’s automobile sales district were badly damaged by protesters who broke away from the main demonstration on May 1. Businesses also sustained heavy damage during protests arising from the deaths of unarmed black men in police custody in Ferguson, Missouri, and elsewhere over the last two years.

Tensions rose anew in Oakland on Thursday when protesters marched in honor of black women killed by police across the nation. But organizers said they were surprised when police pushed them off the streets and onto the sidewalks, citing the mayor’s new policy. No one was arrested Thursday.

Organizers then called for another protest Saturday to demonstrate against the new policy.

“You can’t run roughshod over people because they’re protesting your oppression,” said Cat Brooks, an organizer of both protests. “You can’t push us off the streets.”

Further protests over the new policy are planned, Brooks said.

Rachel Lederman, a lawyer with the National Lawyers Guild who helped Oakland craft its crowd-control policies, said the new tactics appear to violate the guidelines.

“It doesn’t make any sense because saying that marches have to be on the sidewalk has absolutely no relationship to impending property damage that might occur,” Lederman said. “Obviously that would happen on a sidewalk, not a street.”

The mayor didn’t respond to a request for comment.