Cherry picker topples, kills 2 as man shows it to kids

Cherry picker topples, kills 2 as man shows it to kids 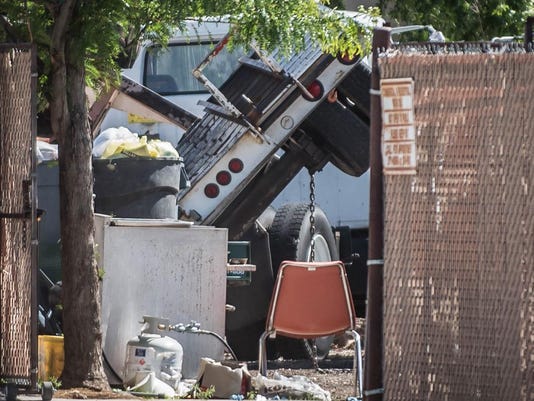 This May 24, 2015 photo shows the scene of a cherry picker accident in Albuquerque, N.M. The deadly accident happened as a man was giving the neighborhood kids a demonstration of the elevated lift, authorities said.(Photo: Roberto E. Rosales / AP)

Albuquerque, N.M. — A cherry picker accident that left a man and a boy dead and injured three other children happened as the man was giving the neighborhood kids a demonstration of the elevated lift, authorities said.

The cherry picker carrying the group toppled over from a strong gust of wind Sunday afternoon, fell on a power line and crashed about 50 feet to the ground, Albuquerque police spokesman Simon Drobik said. All five were thrown from the lift.

The man in his 50s and a 12-year-old boy died. Two boys, ages 7 and 10, were in critical condition, while another 10-year boy was in stable condition.

Other factors besides the wind were likely at play.

Drobik said Monday that there were probably too many people inside the lift’s bucket, and the legs used to stabilize the cherry picker hadn’t been extended because it was sitting atop a flatbed trailer during the demonstration.

The man’s relationship to the children and the identities of those involved haven’t been released.

Drobik said there is no one to criminally charge in the accident, given that the man on the cherry picker died.

The equipment belonged to a tree cutting service. The man’s connection to that company was unclear.