Two of the injured were construction workers, while the others were pedestrians and occupants of passing cars 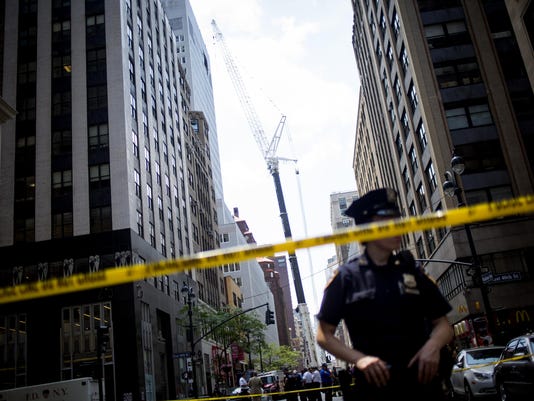 New York — A massive air-conditioning unit being lifted by a crane to the top of a Manhattan office building broke free Sunday, fell 28 stories and landed in the middle of Madison Avenue, injuring 10 people, officials said.

Two were construction workers, while the others were pedestrians and occupants of passing cars, Mayor Bill de Blasio said. All were struck by debris that caused minor injuries; they were treated at hospitals.

Police said the emergency call came in around 10:45 a.m. Officers who responded to the high-rise building a short walk from Grand Central Terminal found that the crane’s payload had broken free as it was heading to the top of the 28-story building. It plummeted to the street, shattering parts of the building facade composed of widening, stepped edges on the lower floors.

De Blasio, speaking to reporters on Madison Avenue a block from the accident, called it “obviously, a very serious incident.”

“Thank God, this incident occurred at an hour of the day on a weekend when there were not too many people around,” the mayor said.

Buildings Department Commissioner Rick Chandler said it was typical for work to be done on weekends when equipment, such as a crane, is being used. He said all the needed permits for the work involving the crane were “in place,” and there had been no official complaints about the crane.

“We think this device, in this preliminary stage, is in good state and we’ll follow up with that,” Chandler said.

The office building on Madison at East 39th Street houses various companies and Zuma, a trendy Japanese restaurant at the street level.

Authorities said a full investigation is underway. Streets were closed in the surrounding area, but officials hoped to have them open again by Monday morning’s rush hour.