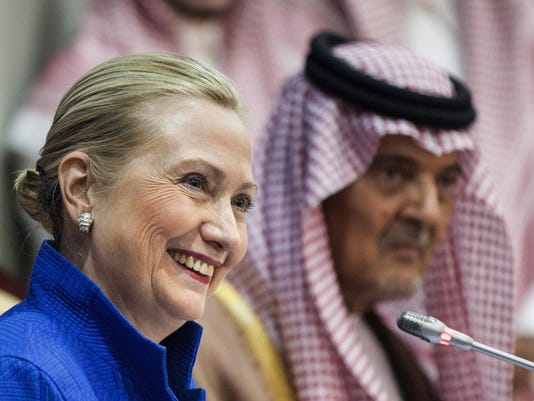 Washington — The State Department has been unable to find in its records all or part of 15 work-related emails from Hillary Rodham Clinton’s private server that were released this week by a House panel investigating the 2012 attack in Benghazi, Libya, officials said Thursday.

The emails all predate the Sept. 11 assault on the U.S. diplomatic facility and include scant words written by Clinton herself, the officials said. They consist of more in a series of would-be intelligence reports passed to her by longtime political confidant Sidney Blumenthal, the officials said.

Nevertheless, the fact that the State Department says it can’t find them among emails she provided surely will raise new questions about Clinton’s use of a personal email account and server while secretary of state and whether she has provided the agency all of her work-related correspondence, as she claims.

“She has turned over 55,000 pages of materials to the State Department, including all emails in her possession from Mr. Blumenthal,” said Nick Merrill, a Clinton campaign spokesman, when asked about the discrepancy.

Clinton is running for the 2016 Democratic presidential nomination.

Clinton’s use of the non-government email while in office was kept hidden from all but a small circle of aides, outside advisers, family members and friends. She says the single account for personal and professional purposes was a matter of convenience, and says all her work emails were included in the 55,000 pages of documents she later handed over to the State Department. Emails of a personal nature were destroyed, she says.

The State Department informed the Select Benghazi Committee on Thursday that they are no longer certain that’s the case, according to officials who spoke on condition of anonymity because they weren’t authorized to speak publicly on the matter. The officials said Julia Frifield, the assistant secretary of state for legislative affairs, confirmed that nine emails and parts of six others that the committee made public Monday couldn’t be located in the department’s records.

As for 46 other, previously unreleased Libya-related Blumenthal emails published by the committee, officials said all are in the department’s records. They weren’t handed over to congressional investigators because they had no relevance to events in Benghazi and did not correspond to the committee’s request, the officials said. The officials added that they are willing to provide emails outside the committee’s initial request, but warned that doing so would require more time.

The emails missing from the State Department’s records include missives from Blumenthal in which he sends media accounts about the killing of one of Libyan dictator Moammar Gadhafi’s sons, various reports on internal politics among Libya’s rebels and news of the assassination of a former Gadhafi minister in Vienna. The last email was sent Aug. 28, 2012, two weeks before the Benghazi attack, and none focus particularly on the eastern Libyan city.

Clinton’s responses are brief. In one from August 2011, she tells Blumenthal she will be in Paris the next day to meet rebel leaders and says she had “to resort to new iPad” because she didn’t have electricity or Blackberry coverage after Hurricane Irene.

In another from March 2012, she passes on an adviser’s skepticism regarding one of Blumenthal’s reports about political intrigue in post-Gadhafi Libya, saying: “This strain credulity based on what I know. Any other info about it?”

And after a long August 2012 note from Blumenthal about Libya’s new interim President Mohamed Yousef el-Magariaf, Clinton writes: “Another keeper — thanks and please keep ‘em coming.” Four days later, she responds to a follow-up reports about el-Magariaf, saying: “Fascinating. I had a very good call w him.”

Clinton’s critics are likely to focus less on the substance of the emails than on the fact that they weren’t shared with the State Department.

Rep. Trey Gowdy of South Carolina, the Benghazi panel’s Republican chairman, has pressed for an explanation of why Blumenthal gave the committee emails not previously shared by the State Department. The suggestion has been that either the department or Clinton was hiding something.

Clinton aides say her submission to the department included all emails from Blumenthal and a dozen more exchanges that weren’t in the records he provided the House committee. They said some from Blumenthal’s record, which was provided as a Microsoft Word document, couldn’t be confirmed as having been sent as emails.

State Department officials also questioned the provenance of some exchanges because they weren’t formatted as emails.