More jobs and cheaper gasoline come with a big, honking downside: U.S. roads are more clogged than ever now 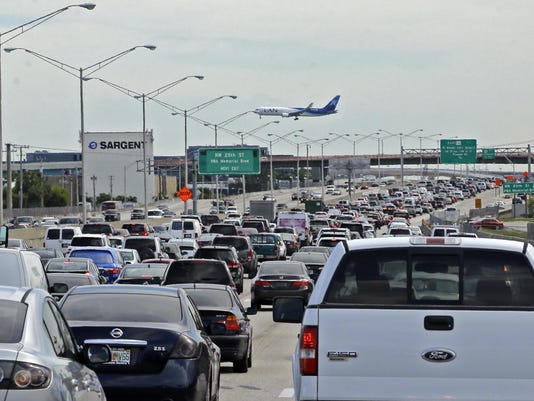 Traffic heading south on the Palmetto Expressway, State Road 826, Aug. 25, 2015, in Miami. Traffic congestion nationally reached a new peak last year and is greater than ever before, according to a report by the Texas A&M Transportation Institute and INRIX Inc.(Photo: Alan Diaz / AP)

Washington — More jobs and cheaper gasoline come with a big, honking downside: U.S. roads are more clogged than ever now that the recession is in the rearview mirror.

Commuters in Washington, D.C., suffer the most, losing an average of 82 hours a year to rush-hour slowdowns, a new study finds. Los Angeles, San Francisco and New York come next on the list of urban areas with the longest delays.

But the pain reaches across the nation.

Overall, American motorists are stuck in traffic about 5 percent more than they were in 2007, the pre-recession peak, says the report from the Texas A&M Transportation Institute and INRIX Inc., which analyzes traffic data.

Four out of five cities have now surpassed their 2007 congestion.

Cities with fast-growing economies and the most job growth are the most plagued by traffic. Other factors: Urban populations are increasing and lower fuel prices are making driving less expensive, so more people are taking to city roads.

The findings are based on federal data about how many cars are on the roads and on traffic speed data collected by INRIX on 1.3 million miles of urban streets and highways.

The growth is outpacing the nation’s ability to build the roads, bridges, trains and other infrastructure to handle all these people on the move. Congress has kept federal transportation programs teetering on the edge of insolvency for nearly eight years because lawmakers have been unwilling to raise the federal gas tax and haven’t found a politically palatable alternative to pay for needed improvements.

Frustrated by Washington’s inaction, nearly a third of states have approved measures this year that could collectively raise billions of dollars for transportation through higher fuel taxes, vehicle fees and bonds. But that’s just a down payment on decades of delayed maintenance, repairs and replacements.

“Our growing traffic problem is too massive for any one entity to handle — state and local agencies can’t do it alone,” said Tim Lomax, a co-author of the report. The report recommends a mix of solutions, including making existing road and transit systems more efficient, encouraging more flexible work schedules, adding capacity to high-growth travel corridors, and creating more high-density neighborhoods where homes, offices, stores and other development can be reached through walking, biking or public transit.

Transportation analyst Alan Pisarski said the nation missed a “tremendous opportunity” to catch up on building additional transportation capacity during the recession, when construction costs plummeted. “We didn’t take advantage of it and now we’re back in the soup again,” he said.

The national average time that commuters wasted stuck in traffic last year was 42 hours, about the same as in 2007 and more than twice the delay in 1982, when the transportation institute first began assessing urban mobility. But because there are so many more commuters today and far more congestion in off-peak hours, total delay across the country has increased over 2007.

The problem has become so bad in major urban areas that drivers have to plan for more than twice as much travel time as they would normally need to account for the possibility of congestion delays caused by bad weather, collisions, construction zones and other impediments, the report said.

Other findings in the report:

— About 40 percent of delays occur in midday and overnight hours, making it more difficult to avoid delays by avoiding commuter rush hours.

— Severe or extreme congestion levels affected one of every four trips in 2014, up from one in nine trips in 1982.

The report comes on the heels of other evidence that Americans are embracing driving more than ever. The Department of Transportation said Americans drove more than 3 trillion miles in the last 12 months, surpassing the previous record set in 2007. And the National Safety Council said preliminary data for the first six months of this year shows traffic deaths are up 14 percent, a turnaround after years of fewer fatalities.