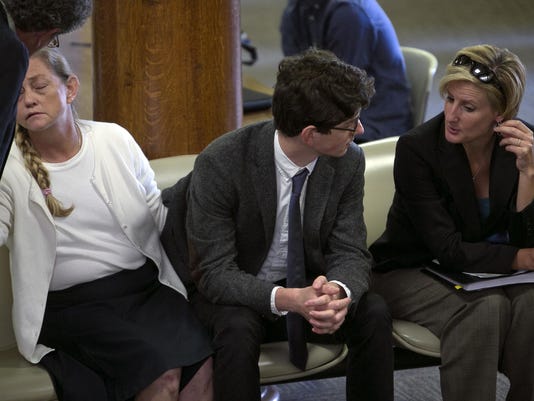 Owen Labrie talks with one of his attorneys Jaye Rancourt, right, as his parents Denise Holland and Cannon Labrie talk in the lobby as they wait outside the courtroom for the verdict in his trial at Merrimack County Superior Court on Friday.(Photo: Geoff Forester / AP)

Concord, N.H. — A graduate of an exclusive New England prep school was cleared of felony rape but convicted of misdemeanor sex offenses Friday against a 15-year-old freshman girl in a case that exposed a campus tradition in which seniors competed to see how many younger students they could have sex with.

A jury of nine men and three women took eight hours to reach its verdict in the case against 19-year-old Owen Labrie, of Tunbridge, Vermont, who was accused of forcing himself on the girl in a dark and noisy mechanical room at St. Paul’s School in Concord two days before he graduated in 2014.

He wept upon hearing the verdict, and his mother sobbed into a tissue.

Labrie, who was bound for Harvard and planned to take divinity classes before his arrest put everything on hold, was acquitted of the most serious charges against him — three counts of felony rape, each punishable by 10 to 20 years in prison — but was found guilty of three counts of misdemeanor sexual assault and other offenses. Each count carries up to a year behind bars.

The scandal cast a harsh light on the 159-year-old boarding school that has long been a training ground for politicians, Nobel laureates, corporate executives and other members of the country’s elite.

Prosecutors said the rape was part of Senior Salute, which Labrie described to detectives as a competition in which graduating eniors tried to have sex with underclassmen and kept score on a wall behind a set of washing machines.

Labrie, an aspiring minister, testified that he and the girl made out, but he said he stopped short of intercourse because he suddenly decided “it wouldn’t have been a good choice for me.” A detective quoted him as saying he had a moment of “divine inspiration” as he was about to put on a condom.

In his testimony, Labrie acknowledged bragging to friends that he had intercourse with the girl, but he said that was a lie told to impress them. He also admitted deleting 119 Facebook messages, including one in which he boasted that he “pulled every trick in the book” to have sex with her.

In graphic and sometimes tearful testimony, the girl, now 16, said she willingly went with Labrie to the rooftop of an academic building after he invited her to take part in Senior Salute, a tradition she said she knew about. But she said she was prepared for kissing at most.

She said Labrie soon become aggressive and she told him, “No, no, no” as he moved his face toward her crotch. She said he eventually penetrated her, and she felt “frozen” — incapable of moving or reacting.

“I tried to block out the feeling as much as I could,” she said. “I didn’t want to believe this was happening to me.”

Under cross-examination, she said she helped Labrie remove her shirt and pants. When questioned about breezy email and Facebook exchanges that she had with Labrie in the hours afterward, she explained that she kept the conversation light because she was trying to find out whether he had worn a condom.

Traces of sperm were found on the girl’s underwear but could not be conclusively linked to Labrie.

Alumni of St. Paul’s include Secretary of State John Kerry, who graduated in 1962 alongside former FBI Director Robert Mueller. “Doonesbury” creator Garry Trudeau also attended the school, as did at least 13 U.S. ambassadors, three Pulitzer Prize winners, actor Judd Nelson and sons of the Astor and Kennedy families. Students pay $53,810 a year in tuition, room and board.

After Labrie’s arrest, school officials said they would expel anyone participating “in any game, ‘tradition,’ or practice of sexual solicitation or sexual conquest under any name” and throw out those possessing keys or access cards they aren’t entitled to. Labrie was said to have used a key that was shared among seniors to get to restricted areas.

The school, which first admitted girls in 1971 and has about 530 students, also brought in experts to discuss topics including substance abuse, harassment and building healthy relationships.

Labrie was captain of the soccer team and said he attended the school on full scholarship. Defense attorney J.W. Carney told the jury that St. Paul’s treated Labrie “shabbily” by taking away an award he received for character and devotion to the school and not adding his name to the wall of all graduates.