Standoff over gay marriage licenses in Kentucky wears on

The U.S. Supreme Court will now be asked to consider whether a clerk can cite religion in denying a gay marriage license

Standoff over gay marriage licenses in Kentucky wears on 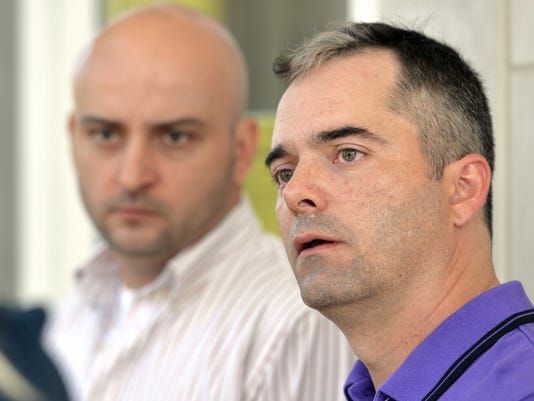 James Yates, right, speaks with reporters as his partner William Smith Jr. looks on at the Rowan County Courthouse in Morehead, Ky., Aug. 27, 2015. The couple were denied a marriage license for a third time despite the ruling of the 6th U.S. Circuit Court of Appeals upholding an earlier decision instructing the clerks to issue mariage licenses.(Photo: Timothy D. Easley / AP)

Morehead, Ky. — A familiar scene repeated itself at a rural Kentucky courthouse: a gay couple marched into the clerk’s office, requested a marriage license and insisted that a mounting pile of court orders proves they are entitled to one.

Then, Rowan County Clerk Kim Davis’ office again turned them away Thursday morning. The standoff has now stretched into its second month.

The U.S. Supreme Court, which two months ago legalized gay marriage across the nation, will now be asked to consider whether Davis can cite her religious conviction and keep denying marriage licenses until her appeal is complete, a process that could drag on for months.

Days after the Supreme Court’s same-sex marriage ruling, Davis announced that her Christian faith prevents her from sanctioning a gay marriage. She has since refused licenses to any couple, gay or straight.

The American Civil Liberties Union sued her last month on behalf of four couples. U.S. District Judge David Bunning ordered Davis to issue marriage licenses two weeks ago. He later delayed that ruling until Aug. 31 or until the U.S. 6th Circuit Court of Appeals issued a ruling. The appeals court did so Wednesday, denying Davis’ appeal.

But on Thursday a deputy clerk in Davis’ office told William Smith Jr. and James Yates, a couple for nearly a decade, that the office believes Bunning’s delay remains in effect until Aug. 31. He refused to give them a license.

Davis, meanwhile, sat in her office with the door closed, ignoring the commotion of television cameras surrounding Yates and Smith as they demanded answers.

Rejected for the third time, Yates and Smith left shaking their heads.

Lawyers with Liberty Counsel, the Christian law firm representing Davis, said the fight is far from over.

“The court of appeals did not provide any religious accommodation rights to individuals, which makes little sense because at the end of the day it’s individuals that are carrying out the acts of the office,” said attorney Mat Staver. “They don’t lose their individual constitutional rights just because they are employed in a public office.”

Staver told The Associated Press he plans to file an emergency petition with the Supreme Court shortly, bidding to delay the judge’s order until an appeal is completed.

Davis’s appeal to the nation’s highest court would first be considered by Justice Elena Kagan, who oversees the 6th Circuit. Kagan, a liberal judge, sided with the majority this summer when it ruled gay marriage bans unconstitutional.

Kagan could reject it outright within days and exhaust Davis’ options for appeal, said Sam Marcosson, a constitutional law professor at the University of Louisville.

“Once the stay is denied then the question will be right there on the front burner of whether she will comply because there will be no further avenue for her,” Marcosson said.

The question will then become what Davis chooses to do.

She has said she will not resign and pledged to never issue a license to same-sex couples.

If she continues to defy court orders, the couples’ attorneys are likely to ask Bunning to hold her in contempt of court. The law offers the judge wide discretion on how to force her hand: he can sanction her with fines or order she be jailed.

The couples waiting to be married think the end may be in sight.

Activists with signs and rainbow umbrellas lined up Thursday on a street outside Davis’ window, shouting “Do your job.”

But she has her supporters, too.

Casey County Clerk Casey Davis, also opposed to issuing licenses to same-sex couples, got on his bike at 4:30 a.m. Thursday and began cycling more than 450 miles across the state to bring attention to her predicament.

“I cannot let my sister go to jail without my doing something to let others know about her plight,” Casey’s statement said. Although the two are not related by blood, The Family Foundation says they are bonded by religious conviction.