Neighbors say the trees are about 150 years old and they’re a public treasure; property owner wants to build 2 houses 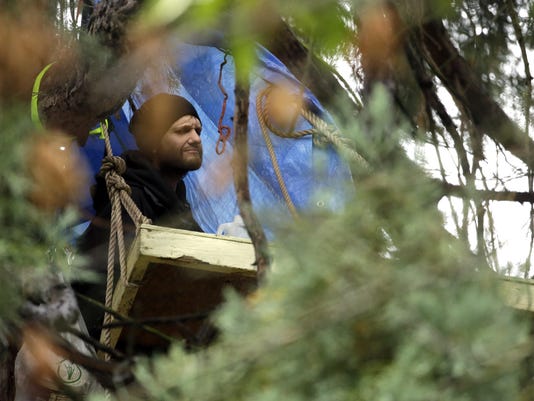 Protester Dave Walters sits on a suspended platform in a giant Sequoia tree in an effort to stop a developer from cutting it and two others down.(Photo: Don Ryan / AP)

Portland, Ore. — A Portland neighborhood is rallying — literally — around three big sequoias that a developer plans to cut down.

Neighbors have gathered at the base of the 150-foot trees since Monday, when a crew hired by the developer arrived with chainsaws. On Thursday, police removed several protesters from the property. But an environmental activist remained suspended on a platform from one of the trees.

Police spokesman Sgt. Pete Simpson said the activist could be arrested if he does not come down and would face criminal trespass charges.

Neighbors say the trees are about 150 years old, they’re part of the neighborhood’s aesthetic, and they’re a public treasure that should be saved.

“I get it that this is private property, but these trees are very old,” neighbor Beth Bogren said. “We’re cutting down a piece of our state’s history. How can we let that happen?”

Everett Custom Homes recently bought the property where the trees grow, in an affluent, leafy neighborhood near top private school Reed College. The developer demolished an old home that stood at the base of the trees and was planning to build two new homes once the trees were cut, Bogren said.

Everett Custom Homes owner Vic Remmers did not immediately respond to a message left at his business seeking comment.

Bogren said the person who lived in the home under the trees told neighbors that the original property owner’s uncle came from California and planted the trees for her 12th birthday, in about 1880.

Robert McCullough, president of the Eastmoreland Neighborhood Association, said the neighbors have been negotiating with the developer for months to buy the property. They hoped to turn it into a small park.

But they were unable to raise the $900,000 sought by Everett Customs Homes — a price much higher than what the developer originally paid for the lots, McCullough said.

He said he’s in talks with the developer and Portland Mayor Charlie Hales to find a solution.

According to a news release, Hales’ chief of staff asked for a stay on cutting down the trees and for protesters to leave the property. There is a tentative deal between the two sides, according to the mayor’s statement, but no details of the negotiations have been released.

“The trees are staying for now,” said the mayor’s office, adding “it is up to the neighbors to implement the deal.”