US rejects protections for greater sage grouse across West

US rejects protections for greater sage grouse across West 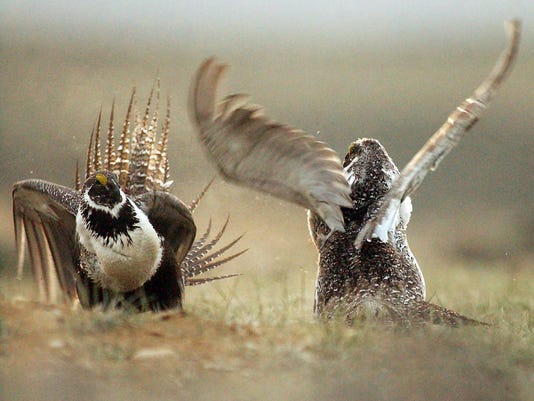 The fight over whether to list the bird as endangered or threatened recalled the battle over the spotted owl 25 years ago, in which federal protection greatly impeded the logging economy. The Obama administration, affected states and outside groups have committed more than $750 million to saving the grouse without Endangered Species Act protections that many argued would threaten the oil and gas industry and agriculture.

Tuesday’s announcement signaled that the Obama administration believes it has struck a delicate balance to save the birds from extinction without crippling the West’s economy. It also could help defuse a potential political liability for Democrats heading into the 2016 election — federal protections could have brought much more sweeping restrictions on oil and gas drilling, grazing and other human activities from California to the Dakotas.

The government provides some level of habitat protections on 67 million acres of federal lands, including 12 million acres where strict limits on oil and gas limits will be enforced, Interior Secretary Sally Jewell said. That’s more than a third of the animal’s total range and does not include millions of acres of private land shielded by conservation easements or where restoration work has occurred.

“It does mean a brighter future for one amazing, scrappy bird,” Jewell said during a formal announcement at the Rocky Mountain Arsenal National Wildlife Refuge just north of Denver. “This is the largest, most complex land conservation effort ever in the history of the United States of America.”

The governors of Wyoming, Montana, Colorado and Nevada joined Jewell, who said the decision showed that federal wildlife laws can serve as a “catalyst for conservation” while still allowing for economic development.

Elected officials and interest groups gave a mix of praise and condemnation.

Petroleum industry representatives said measures enacted to prop up the bird’s population threaten to choke off oil and gas production. That echoed previous concerns raised by the governors of Montana and Wyoming over federal land-use plans intended to preserve the grouse’s shrinking habitat.

Some conservation groups, including the Environmental Defense Fund and National Audubon Society, said the case demonstrates that cooperation among governments and private interest groups can preserve imperiled species. Other advocates said loopholes in federal land-use plans allow too much development.

Greater sage grouse once numbered an estimated 16 million birds. Over the last century, they lost roughly half their habitat to development, livestock grazing and an invasive grass that’s encouraging wildfires in the Great Basin of Nevada and adjoining states. An estimated 200,000 to 500,000 birds now occupy sagebrush habitat spanning 11 states.

Tuesday’s finding reverses a 2010 determination that the sage grouse were in precipitous decline. Under a federal court settlement with the group WildEarth Guardians, the U.S. Fish and Wildlife Service faced a Sept. 30 deadline to decide the bird’s status.

Erik Molvar with WildEarth Guardians said Interior officials had turned an opportunity to help the grouse into “an epic conservation failure.” He said exceptions, modifications and waivers within federal land-use plans means protections could evaporate with the stroke of a pen.

House Natural Resources Committee Chairman Rob Bishop said the decision on grouse was a “cynical ploy” intended to mask the fact that the Obama administration was imposing limits on development across the West.

“Do not be fooled,” the Utah Republican said in a statement. “With the stroke of a pen, the Obama administration’s oppressive land management plan is the same thing as a listing” under the Endangered Species Act.

The ranking Democrat on the committee, U.S. Rep. Raul Grijalva of Arizona, countered that Republicans attack Obama either way — when his administration lists a species as endangered and when it decides against a listing.

The administration has poured hundreds of millions of dollars into conservation measures in hopes of patching together enough sagebrush habitat to ensure the bird’s long-term survival. Federal officials worked with state governments to adopt their own habitat protection plans, which included local restrictions on energy development and setting aside private and public lands as habitat.

In addition, sales of oil and gas leases that were previously deferred on more than 8 million acres will undergo a 90-day review before a final decision is made.

At the center of the fracas has been Wyoming, home to roughly 40 percent of the bird’s population and a hub of fossil fuel development, with huge potential for wind energy and uranium mines.

Efforts to avoid protections in Wyoming have resulted in a significant impact: No drilling may take place near vital sage grouse breeding grounds during nesting season. Oil and gas wells in areas deemed as core habitat must be clustered together and directionally drilled from well pads.

Other states have adopted similar plans.