Pope Francis mingles with high and low in N.Y. visit

Pope Francis is emphasizing themes that have shaped his popular papacy

Pope Francis mingles with high and low in N.Y. visit 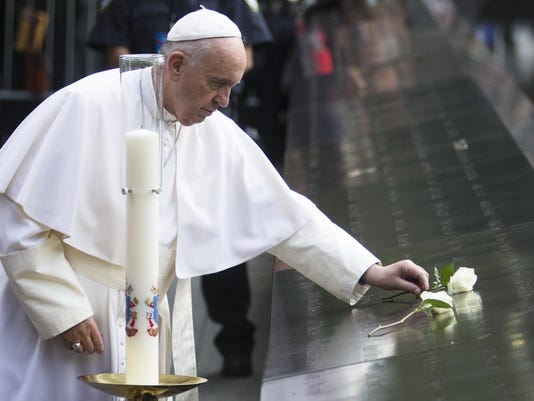 The pope places a rose at the South Pool of the 9/11 Memorial in downtown Manhattan where the twin towers once stood.(Photo: John Minchillo / AP)

New York — Sweeping through the landmarks of America’s biggest city, Pope Francis on Friday offered comfort to 9/11 victims’ families at ground zero, warnings to world leaders at the United Nations and encouragement to schoolchildren in Harlem as he mixed the high and low ministry so characteristic of his papacy.

In the early evening, he led a jubilant parade through Central Park past a crowd of about 80,000 and celebrated Mass at Madison Square Garden, usually the site of basketball games and rock concerts but this time the scene of a solemn service celebrating New York in all its diversity.

“Living in a big city is not always easy,” Francis told 18,000 people at the Garden, easily one of the most respectful crowds the arena has ever seen. “Yet big cities are a reminder of the hidden riches present in our world in the diversity of its cultures, traditions and historical experiences.”

Francis’ itinerary for his only full day in New York was packed with contrasts befitting a head of state dubbed the “slum pope” for his devotion to the poor. He moved from the corridors of power to the grit of the projects with lush Central Park in between.

He drew huge, adoring crowds while also managing to connect one-on-one with countless New Yorkers, despite extraordinarily tight security that closed off many streets and kept most spectators behind police barricades.

Pope Francis places a white rose at the South Pool of the 9/11 Memorial in downtown Manhattan on Friday, Sept. 25, 2015, in New York. John Minchillo, AP
Fullscreen

People point their cameras toward a nearby Pope Francis as he came closer to a crowd of well-wishers while traveling in a motorcade in New York's Central Park. Craig Ruttle, AP
Fullscreen

Fans of Pope Francis raise their cameras and cellphones as his motorcade and popemobile approached. Kathy Willens, AP
Fullscreen

Pope Francis waves at the audience while sitting in the head of state chair before addressing the 70th session of the United Nations General Assembly, Friday, Sept. 25, 2015. Mary Altaffer, AP
Fullscreen

Pope Francis, second left, reads a passage during a multi-religious service at the 9/11 Museum, Friday, Sept. 25, 2015 in New York City. The Pope is on a two-day visit to New York which includes addressing the United Nations and holding mass at Madison Square Garden before heading to Philadelphia. Monica Graff, AP
Fullscreen

Pope Francis greets guests inside of the 9/11 Memorial and Museum on September 25, 2015 in New York City. Pool, Getty Images
Fullscreen

Pope Francis speaks with Iman Khalid Latif, Executive Director of the Islamic Center and chaplain to the students at New York University, during a multi-religious ceremony at the 9/11 Memorial and Museum on on September 25, 2015 in New York City. Pool, Getty Images
Fullscreen

Nuns celebrate as they wait for the arrival of Pope Francis at St. Patrick's Cathedral. VINCENZO PINTO, AFP/Getty Images
Fullscreen

Pope Francis, right, is joined by Cardinal Timothy Dolan, the archbishop of New York, as he prays at the altar of Saint Elizabeth before an evening prayer service at St. Patrick's Cathedral. Mary Altaffer, AP
Fullscreen

Pope Francis reaches out to fifth-grader Omodele Ojo of Brooklyn as he is greeted as he arrives at John F. Kennedy International Airport. CRAIG RUTTLE, AFP/Getty Images
Fullscreen

Police officers keep vigil from behind iron fences as people gather near the St Patrick Cathedral where Pope Francis is due to arrive to lead evening prayers in New York. JEWEL SAMAD, AFP/Getty Images
Fullscreen

Sisters are checked by security on their way to St. Patrick's Cathedral on 5th Avenue in New York. Carolyn Cole, TNS
Fullscreen

A nun finds her seat as monks chat ahead of the arrival of Pope Francis at St Patrick's Cathedral. Carl Court, Getty Images
Fullscreen

A supporter wears Pope Francis buttons at the barricades around the perimeter of St. Patrick's Cathedral before his arrival. John Minchillo, AP
Fullscreen

A nun takes a photograph as she awaits the arrival of Pope Francis at St Patrick's Cathedral. Carl Court, Getty Images
Fullscreen

“As he passed by, you passed a cool, refreshing peace, as if he were spreading a huge blanket of peace through the crowd,” Ruth Smart of Brooklyn said of the procession in Central Park. “Even though the crowd exploded in a roar, it was pure joy.”

On Saturday morning, he flies to Philadelphia for a big Vatican-sponsored rally for Catholic families. As many as 1 million people are expected for the closing Mass on Sunday, the last day of Francis’ six-day, three-city visit to the U.S., the first of his life.

As Friday’s Mass came to a close with a sustained and thunderous roar of applause, the toll of the long day seemed evident as an exhausted Francis walked with assistance down the stairs of the altar.

In his speech at the U.N., the pope decried the destruction of the environment through a “selfish and boundless thirst for power and material prosperity.”

He declared the environment itself has rights, and that mankind has no authority to abuse them, presenting his environmental mantra live before world leaders in hopes of spurring concrete commitments at the upcoming climate-change negotiations in Paris.

He demanded immediate access for the world’s poor to adequate food, water and housing, saying they have the right to lodging, labor and land.

Rep. Dan Kildee, D-Flint Township, attended Pope Francis’ address at the invitation of U.N. Ambassador Samantha Powers, calling it a “once in a lifetime” experience to be on the floor of the General Assembly. U.S. Sen. Ed Markey of Massachusetts was with them.

Regarding Francis’s endorsement of the Iran deal, Kildee — who supports the deal — said the pope’s remarks were “right on point.”

“Both his speech to Congress and to the General Assembly focused on peace and reconciliation and engagement, as opposed to always defaulting to tools of war and to violence,” Kildee said in an interview.

Kildee said he hopes Francis’ overall message will influence the thinking of some international leaders.

“Any time you have a world leader who carries with him some moral authority to say something that clearly and poignantly, I think that has to open at least the eyes of some who might otherwise not think about the same way,” Kildee said.

“His whole point is to stop thinking about these issues as if they were battles between nations or interest, but to actually think about the effect they have on human beings and families. That reminder — from someone who stands outside the political process from such a strong, international platform — potentially could have impact.”

Kildee said Francis has made clear this week he’s willing to challenge conventional thinking and approaches to global problems such as conflict, immigration, on the environment.

“His moral authority combined with his willingness to challenge entrenched power has that potential for him to be a transformational leader,” Kildee said. “He has that potential. We will see what effect he has.”

The ovations contrasted sharply with the moment of silent prayer during the pope’s visit later in the morning to ground zero for an interfaith tribute to the Sept. 11 victims.

After praying before the waterfall pools that mark the spot where the twin towers once stood, Francis met with relatives of the 3,000 victims whose names are inscribed on the water’s edge.

Among those on hand was Monica Iken-Murphy, whose husband, bond trader Michael Patrick Iken, died in one of the towers.

“This is where loved ones lost their lives … and this is the way we are going to honor them by having someone who is holy, closest to God, Pope Francis, come here and bless this site,” Iken-Murphy said. “I couldn’t be prouder to share this memorial and museum with him.”

Francis’ afternoon schedule reflected the penchant of the “people’s pope” for engaging with the public, starting with a visit to Our Lady Queen of Angels School, set amid public housing in the heavily Hispanic neighborhood of East Harlem.

After the morning’s deadly serious activities, the 78-year-old pope clearly perked up when he got to the Catholic school. He joked around with the children, chatted happily with them in Spanish, shook hands and posed for a few selfies. A security guard intervened when one girl gave him a big hug.

The pope — who says he hasn’t watched TV in decades and doesn’t know how to work a computer — even got a lesson in how to use a touchscreen from fourth-grader Kayla Osborne, age 8.

The crowd in the gym included about 150 immigrants and refugees, some of them in the U.S. illegally.

In his remarks, Francis recalled the Rev. Martin Luther King Jr.’s “I Have a Dream” speech, saying: “His dream was that many children like you could get an education. It is beautiful to have dreams and to be able to fight for them.”

From Harlem Francis headed toward Central Park, where he smiled as he rode slowly in his open-sided Jeep past a cheering, shrieking crowd and a sea of arms holding cellphones aloft. For those lucky enough to score a ticket, there was a catch: No backpacks, no chairs and no selfie sticks.

About a half-hour before the popemobile passed through, a rainbow suddenly appeared above the crowd, which erupted in joyous “Oooohs!” and “Ahhhhhs!”

Denise Villasenor, a 27-year-old Columbia University graduate student from the Philippines and a Catholic, practiced capturing a selfie with the pope ahead of the procession.

“The pope’s positions always revolve around compassion and love — you know, being a person for others,” she said. “Immigration, the environment, it all comes to being compassionate, for others.”

During the visit to the United Nations, the Vatican flag was raised there for the first time. The General Assembly recently agreed to allow the U.N.’s two observer states, the Holy See and Palestine, to fly their flags alongside those of the 193 member states.

Although his U.N. remarks on the environment and the economy carried a message many liberals welcomed, Francis also affirmed church doctrine on abortion and sexuality.

Among other things, he called for the “absolute respect for life in all its stages,” including the unborn.