All the robberies involved suspects in dark hoodies and masks, but a firm link hasn’t been established 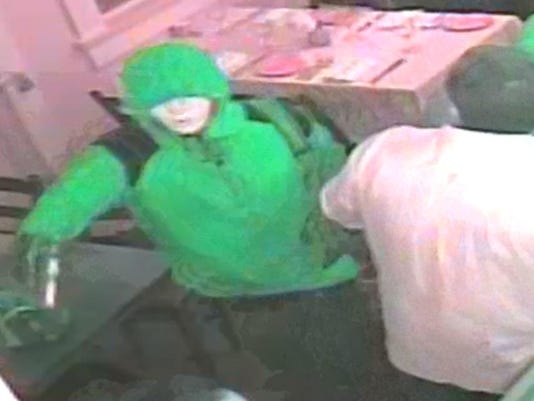 This image taken from surveillance footage provided by the New Orleans Police Department, shows three men suspected of an armed robbery on Aug. 20, 2015, at Patois restaurant in New Orleans. The latest headache for the beleaguered New Orleans Police Department: late night robberies in which gunmen burst into tony establishments in normally quiet areas, making off with the night's take and the wallets of terrorized patrons. It's happened at two restaurants in recent weeks and at an upscale bar on Monday night, Sept. 28.(Photo: AP)

New Orleans — The latest headache for the beleaguered New Orleans Police Department: late-night robberies in which gunmen burst into tony establishments in normally quiet areas, making off with the night’s take and the wallets of terrorized patrons. It’s happened at two restaurants in recent weeks and at an upscale bar on Monday night.

The Monkey Hill was the latest crime scene. Three gunmen entered about 10:30 p.m., ordered customers to the floor then robbed everybody before escaping.

Chappy’s, which provides food service at the Monkey Hill, is closed on Monday and so was spared. Chapman said he planned to open as usual Tuesday night, but added that he and other business owners are worried that fearful customers will stay home rather than enjoy the neighborhood night life.

“They’re all afraid they’re going to cocoon, go in their little shells,” Chapman said Monday. “We want the opposite to happen. You’ve got to come out and support these businesses.”

During a Tuesday news conference at police headquarters, U.S. Attorney Kenneth Polite said there are enough similarities in the three robberies that federal arms and conspiracy charges may apply. The venues also had similarities. Monkey Hill Bar was voted “Best Upscale Bar” and “Best Place to Get a Martini” by readers of one local tabloid. A few blocks away is Patois, a cozy and elegant venue for classic French cuisine, robbed last month; a few miles downriver is Atchafalaya, another critically acclaimed neighborhood favorite, robbed a week ago.

All the robberies involved suspects in dark hoodies and masks, but a firm link hasn’t been established.

“We are not ready to connect all three incidents,” police chief Michael Harrison said at the news conference where Mayor Mitch Landrieu, Polite and several City Council members lined up to decry the robberies.

Darlene Cusanza of the local Crimestoppers organization said the reward for information leading to solutions in the robberies totals $30,000.

A day earlier, Landrieu and Harrison had touted the arrest of a teenager suspected in five recent armed robberies. They said Tuesday that recent arrests have cleared 19 recent robberies. Landrieu said statistics show that overall violent crime is down in New Orleans over the past 20 years.

He conceded, however, that many in the city don’t feel safe.

Political opponents have criticized Landrieu for allowing a police force to fall below 1,200 when officials say it should be around 1,600-strong. That’s the result, he has said, of hard choices made after he inherited an $80 million budget deficit in 2010. Council member Susan Guidry said Tuesday the city now has funds to hire new officers, but added that training new officers takes time.

Harrison said investigators would examine all available surveillance cameras near Monkey Hill Bar in a search for clues. Police also planned to contact area establishments about ways to increase security. Landrieu said he was meeting with restaurant industry representatives to discuss the issues.

Chapman said he can’t afford to add more security, yet he’s not relying solely on police protection. “We’ve got cameras already. We’ve got that all in place. They’ve got patrolmen. People in the neighborhood are just going to have to be absolutely looking at every little thing and just be observant,” he said. “Extremely observant.”