Reusable rocket: In a first, booster returns safely to Earth

Reusing rockets, rather than discarding them, would be a big step toward making space flight less expensive

Reusable rocket: In a first, booster returns safely to Earth 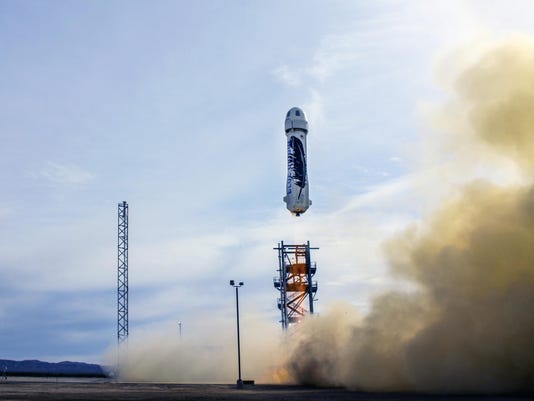 An unmanned Blue Origin rocket blasts off in West Texas. The private company announced Tuesday that it had gotten the rocket to land gently enough to be used again, a first in aeronautics. In Monday’s flight, the capsule reached a height of about 62.5 miles after separating from the booster. The capsule parachuted back to Earth.(Photo: Blue Origin / AP)

New York — A private space company announced Tuesday that it had landed a rocket upright and gently enough to be used again, a milestone in commercial aeronautics.

Reusing rockets, rather than discarding them, would be a big step toward making space flight less expensive.

The achievement produced “the rarest of beasts: a used rocket,” Jeff Bezos, founder of the company Blue Origin, said in a statement. He is the CEO of Amazon.com Inc.

Another private company, SpaceX, has tried to land boosters upright on a barge in the ocean but so far has failed.

Blue Origin said the unmanned flight took place Monday morning at its site in Van Horn in West Texas. The secretive company, based in Kent, Washington, did not invite reporters to attend. Its first test flight happened in April.

Its New Shepard vehicle consists of a capsule that is designed to take people into space for suborbital flights someday, and a booster. In Monday’s flight, the booster soared about 62 miles high and released the capsule, which parachuted to the ground.

After the separation, the booster began falling back to Earth. It slowed its descent by firing its engine, starting at about 4,900 feet above ground. It was descending at just 4.4 mph when it touched down at the launch site, still standing up, the company said.

“It’s really a major step forward toward reusability,” John M. Logsdon, professor emeritus at the George Washington University’s Space Policy Institute, said in an interview. Although NASA space shuttles were also reusable after returning to Earth safely, they were far more expensive than rockets, he noted.