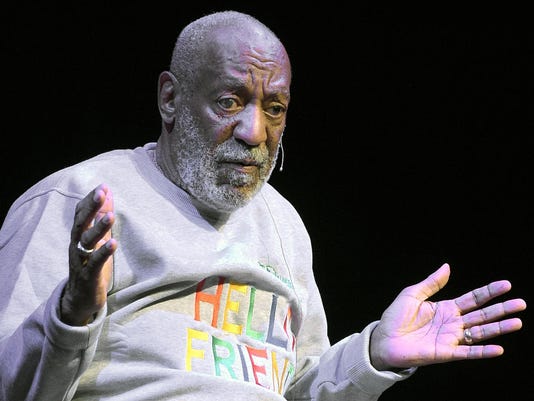 Pittsburgh — Bill Cosby’s attorneys have moved a defamation lawsuit by a Pittsburgh-area woman from state to federal court.

The document filed late Tuesday is known as a notice of removal. It lets someone move a lawsuit to federal court if the parties live in different legal jurisdictions.

The filing indicates Cosby is a resident of Massachusetts, while his accuser, Renita Hill, lives in the Pittsburgh suburb of Baldwin.

“Whether our claims are ultimately litigated in state or federal court, Renita remains resolute in her aim to see that Bill Cosby is held accountable for his actions,” her attorney, George Kontos, said Wednesday.

The 48-year-old woman sued in October claiming Cosby drugged and had sex with her several times after they met on a children’s educational TV show in 1983. Hill claims that went on for about four years, starting when she was 16, and that Cosby helped pay for her college, and would fly her to cities where he was performing and provide her with hotel rooms where he’d have sex with her.

Hill’s defamation lawsuit contends Cosby’s blanket denials that he sexually abused women make her out to be an opportunistic liar.

Efrem Grail, the Pittsburgh-based attorney who filed the notice of removal, said he forwarded a request for comment to Cosby’s camp, which didn’t immediately comment on the motion, or Hill’s allegations.

On Monday, Cosby filed counterclaims in federal court in Boston against seven women who are suing him there for defamation. Like Hill, those women contend Cosby defamed them by allowing his representatives to brand them as liars.

In the countersuit, Cosby claims the women made “malicious, opportunistic, and false and defamatory accusations” of sexual misconduct against him that are “nothing more than an opportunistic attempt to extract financial gain from him.”

Hill and the Massachusetts women are among approximately 50 who have accused the comedian of rape or unwanted sexual contact.

It wasn’t immediately clear what Cosby’s attorneys hoped to gain by moving Hill’s lawsuit to federal court. If it goes to trial, it will be conducted at the federal courthouse in downtown Pittsburgh, which is about three blocks away from the Allegheny County Courthouse where it was filed Oct. 15.

St. Vincent College law professor Bruce Antkowiak said Pennsylvania’s defamation statutes will still hold sway in federal court and, even if they didn’t, most defamation cases come down to disputes that rely heavily on past U.S. Supreme Court opinions on the subject.

“It probably is just simply to get the matter out of a state court and into a federal court, the idea of a federal court being a more neutral ground,” Antkowiak said.

“Also, his lawyers are probably much more familiar with federal rules of civil procedure,” Antkowiak said. “If he’s eventually got lawyers coming in from out of town, they’re probably more used to practicing in federal court, so that could somewhat level the playing field.”