Police and Fish and Wildlife employees captured the animal after tranquilizing it; neither bear nor people were injured 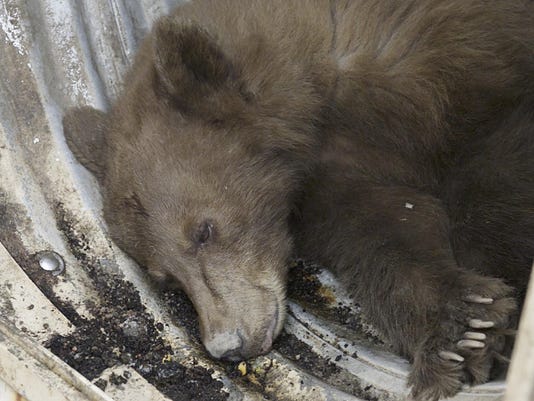 A black bear sits in the back of a transport trailer after it was tranquilized by wildlife biologists in Fresno, Calif. The black bear crawled inside a trash compactor and took the ride of its life, traveling about 65 miles to a dump in central California where it briefly ran free.(Photo: Craig Kohlruss / AP)

Fresno, Calif. — A black bear crawled inside a trash compactor and took the ride of its life on a garbage truck, traveling about 65 miles to a dump in central California where it briefly ran free.

Fresno officers went to a disposal site Tuesday after getting a report of a large bear running loose. The bear got into a trash compactor that was picked up by a disposal truck in the Hume Lake area earlier in the day.

The driver wasn’t aware that the bear was inside the compactor. Officials say it was either sleeping there or rifling through the trash.

Police and California Department of Fish and Wildlife employees eventually captured the animal after tranquilizing it. Neither the bear nor any people were injured.

The bear is being returned to Hume Lake.