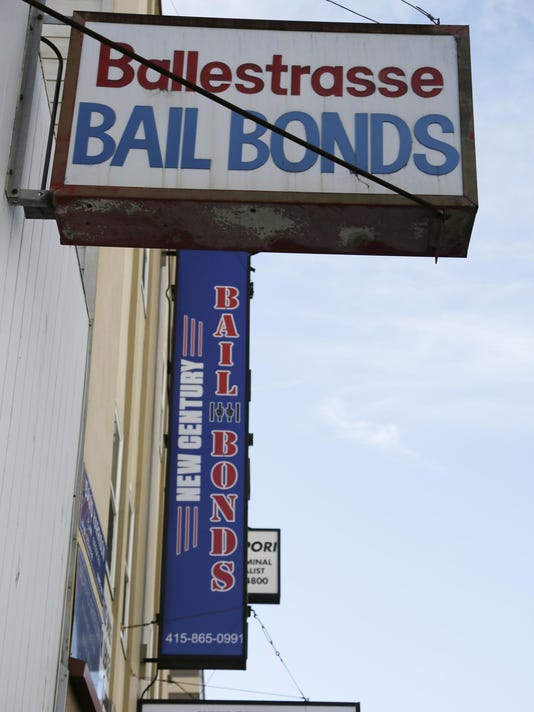 A number of bail bonds offices are seen across from the Hall of Justice in San Francisco. Two Harvard law school graduates are waging war against the time-honored cash bail bond system, saying it discriminates against poor people who don’t have homes to put up as security for getting out of jail(Photo: Eric Risberg / AP)

San Francisco — Crystal Patterson didn’t have the cash or assets to post $150,000 bail and get out of jail after her arrest for assault in October.

So Patterson, 39, promised to pay a bail bonds company $15,000 plus interest to put up the $150,000 bail for her, allowing to go home and care for her invalid grandmother.

The day after her release, the district attorney decided not to pursue charges. But Patterson still owes the bail bonds company. Criminal justice reformers and lawyers at a nonprofit Washington D.C. legal clinic say that is unconstitutionally unfair.

The lawyers have filed a class action lawsuit on behalf of Patterson, Rianna Buffin and other jail inmates who argue that San Francisco and California’s bail system unconstitutionally treats poor and wealthy suspects differently.

Wealthy suspects can put up their houses or other valuable assets — or simply write a check — to post bail and stay out of jail until their cases are resolved. Poorer suspects aren’t so lucky. Many remain behind bars or pay nonrefundable fees to bail bonds companies.

San Francisco public defender Chesa Boudin says some of his clients who can’t afford to post bail plead guilty to minor charges for crimes they didn’t commit so they can leave jail.

Boudin represented Buffin, 19, after her arrest for grand theft in October. Buffin couldn’t afford to post the $30,000 bail or pay a bond company a $3,000 fee and so contemplated pleading guilty in exchange for a quick release from jail even though she says her only crime was being with the “wrong people at the wrong place at the wrong time.”

Fortunately, the district attorney declined to charge Buffin and she was released after being held for three days.

“My family was worried,” said Ruffin, who lost her $10.50 an hour baggage handler job at the Oakland International Airport after her arrest.

The lawsuit filed by the Equal Justice Under Law in San Francisco federal court in October seeks to abolish the cash bail system in the city, state — and the country. It’s the ninth lawsuit the center has filed in seven states.

“The bail system in most states is a two-tiered system,” said center founder Phil Telfeyan. “One for the wealthy and one for everyone else.”

The center has settled four lawsuits, convincing smaller jails in states in the South to do away with cash bail requirements for most charges.

Telfeyan said a win in California could add momentum to the center’s goal to rid the country of the cash bail system, which the lawyers say is used by most county jails in all 50 states. The federal system usually allows non-violent suspects free without bail pending trial and denies bail to serious and violent suspects.

“The country watches what happens in California,” said Telfeyan, a former Department of Justice attorney who founded the Washington organization in 2013 with a partner and the first-ever grant from the Harvard Law School Public Service Venture Fund in 2013.

Telfeyan said it’s not his goal to put out of business the classic neon-advertising bail bonding industry, but conceded the business model would become obsolete if he convinces courts that the cash bail system is unconstitutional.

San Francisco Sheriff Ross Mirkarimi argues that most jail inmates are awaiting resolution of minor, non-violent crimes and that letting them free while awaiting court hearings will save the city millions of dollars. Mirkarimi said non-violent suspects can be monitored electronically and with frequent visits from law enforcement officials to ensure they don’t flee the area and attend all their court hearings.

Maggie Kreins, who is president of bail agents group, the says the longtime system of putting up money or an insurance-backed bail bond is better at getting people to show up in court and it saves the public costs of monitoring defendants or hunting down bail jumpers.

Kreins said that California’s “bail schedule” could be reformed to lower bail amounts for minor crimes, but that scrapping the system completely would be a mistake.

“What is the incentive to go to court if you don’t lose anything for failing to appear?” Kreins said.