Gov’t report: Budget deficit to rise to $544B this year

Gov’t report: Budget deficit to rise to $544B this year 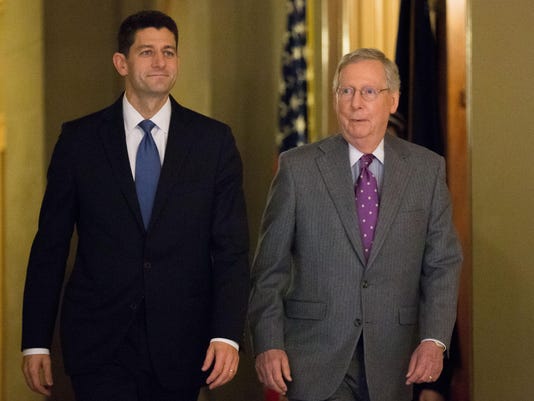 House Speaker Paul Ryan of Wis., left, and Senate Majority Leader Mitch McConnell of Ky. walk on Capitol Hill in Washington. A government report released Tuesday estimates that this year's budget deficit will rise to $544 billion, an increase over prior estimates that can be attributed largely to tax cuts and spending increases passed by Congress last month.(Photo: Andrew Harnik / AP)

Washington — A government report released Tuesday estimates that this year’s budget deficit will rise to $544 billion, an increase over prior estimates that can be attributed largely to tax cuts and spending increases passed by Congress last month. The deficit and debt picture over the long-term has also worsened considerably.

The estimate from the Congressional Budget Office also sees the economy growing at a slower pace this year than it predicted just a few months ago. It projects the economic growth will slow to 2.7 percent this year; it foresaw 3.0 percent growth in 2016 in last summer’s prediction.

Over the coming decade, CBO predicts deficits totaling $9.4 trillion. That’s up $1.5 trillion from its August estimate, with much of the increase mostly due to last month’s tax legislation, which permanently extended several tax cuts that Congress had typically renewed temporarily. But slower economic growth in coming years and increased spending on veterans benefits and health care for the poor are other major factors.

The deficit increase to $544 billion is due to several factors, CBO said, particularly the retroactive extension of tax cuts that had expired at the beginning of last year and additional spending for the Pentagon and domestic agencies that’s a result of last year’s budget deal. A timing shift are large payments is also at work. The current budget year ends Sept. 30.

The deficit issue has largely fallen in prominence in Washington in recent years, due in large part to its fall from record highs and a sense of resignation that Obama and congressional Republicans simply can’t agree on ways to cut it after some failed attempts in recent years. At 2.9 percent of the size of the economy, most economists don’t believe the deficit is very worrisome in the short term.

But the picture over the long run is more dire, CBO says in its report. As deficits rise over the decade and the national debt grows, interest rates are likely to be forced up, economic growth could slow, and policymakers may have no choice but to raise taxes and cut spending more sharply than if they acted now.

Deficits would rise to about 5 percent of gross domestic product within 10 years, CBO expects, and the resulting debt could cause big economic problems.

“Such high and rising debt would have serious negative consequences for the nation,” CBO said.

The CBO study could actually underestimate the deficit picture for the future. The agency’s rules require that it assumes Congress sticks to current policies. But lawmakers in recent years haven’t demonstrated they can stay within tight “caps” on spending for day-to-day agency operations and there are still expiring tax cuts that Washington is likely to renew. And CBO’s estimates assume that the economy won’t lapse into recession but will grow by at least 2 percent each year through 2020. The agency sees unemployment dropping to 4.5 percent by next fall.

The report hits as Republicans controlling Congress are girding for this spring’s debate on the budget. Last year, Republicans adopting a nonbinding budget blueprint that promised a budget surplus by 2024 through eliminating the Affordable Care Act and sharp spending cuts. But they did nothing to actually implement that budget plan other than trying to partially repeal so-called Obamacare through a unique type of legislation that can’t be filibustered by Senate Democrats. Obama vetoed the measure.

Last week, House Speaker Paul Ryan, R-Wis. — who’s promised to use the congressional agenda to draw an election-year case for awarding Republicans the presidency after eight years of Democratic control — said efforts to tangibly cut spending won’t be part of that agenda. He said the House will pass another nonbinding budget but won’t seek to deliver real, binding spending legislation to the president.

“We’re going to lay out a case to the public on what it’s going to take to get this country’s fiscal house in order and clearly that’s going to take a Republican president because this president has continued to kick the can down the road and I see no change in his behavior,” Ryan told reporters last week.