Life rafts found, but no Marines after Hawaii crash

No sign of the missing 12 crew members, and no indication they used the rafts

Life rafts found, but no Marines after Hawaii crash 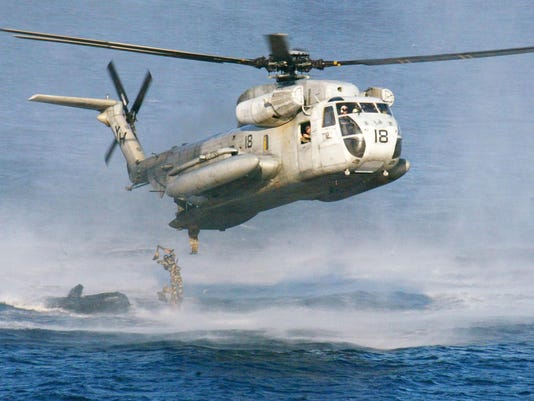 Honolulu — The Coast Guard has found the fourth life raft from two Marine helicopters that crashed off Hawaii, but no sign has emerged of any of the 12 missing crew members.

All the rafts aboard the helicopters have been recovered and all had been empty, Marine Capt. Timothy Irish said. A good Samaritan spotted the final raft on Monday afternoon, and a Coast Guard vessel recovered it 3 miles north of Oahu, said Petty Officer Tara Molle, a Coast Guard spokeswoman.

There is no indication anyone had been on any of the rafts, based on their condition and the lack of any personal effects, she said.

The Coast Guard promised that families would be notified before plans to end the search, which has entered its fifth day.

“Our focus is to locate these Marines and know with absolute certainty we’ve thoroughly canvassed every location we might find them,” Lt. Scott Carr, spokesman for the Coast Guard 14th District in Honolulu.

Agencies have been searching the water and the shoreline since a civilian spotted the helicopters late Thursday, saw a fireball and then alerted the Coast Guard.

The search is still for survivors. The Coast Guard assumes the best-case scenario when considering how long someone in the right equipment and right conditions could survive, Coast Guard Chief Petty Officer Sara Mooers has said.

“We err on the side of caution because the last thing that anybody wants is to suspend the search when there’s still a possibility of finding somebody,” she said Monday.

Aircrews wear personal flotation devices with their flight suits and get additional training on top of survival swimming training, the Marines said.

Some of the life rafts were inflated, but it was unclear how they got that way, Mooers said. There are various ways that could happen, including a cord being pulled by debris, said Irish, the Marine captain.

People have been found days or even weeks after getting lost at sea, Mooers said.

They would have to survive the crash and then possible dehydration, exposure and fatigue, said Mario Vittone, a retired Coast Guardsman who is an expert on sea survival. Survival seems unlikely, Vittone said, but he noted that he doesn’t know all the circumstances and there’s nothing unusual in the length of the search so far.

Some families were holding out hope for survivors, with some making plans to travel to Hawaii. The Marines are from various states, including Capt. Kevin Roche of St. Louis.

Roche’s “family is going to fly to Hawaii to be there for Kevin and with the Marines as we continue to pray and hope for Kevin’s return,” said his brother-in-law, Anthony Kuenzel.