Daniel Holtzclaw, who is half-white and half-Japanese, targeted black women while on patrol 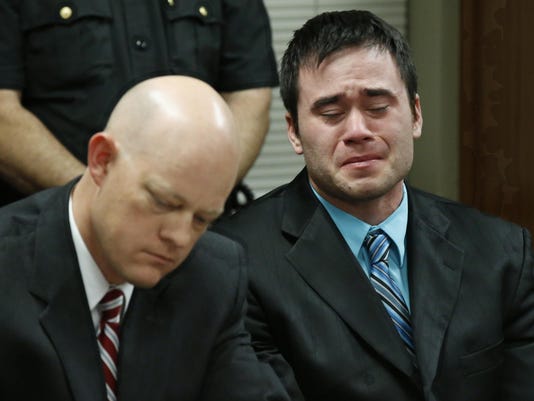 Daniel Holtzclaw, right, cries as the verdicts are read in his trial in Oklahoma City. At left is defense attorney Robert Gray.(Photo: Sue Ogrocki / AP)

Oklahoma City — A former police officer convicted of raping and sexually victimizing women while on his beat in a low-income Oklahoma City neighborhood was ordered Thursday to spend the rest of his life in prison.

Jurors had recommended that Daniel Holtzclaw, a former Eastern Michigan University football star who joined law enforcement after a brief attempt at pursuing an NFL career, be sentenced to 263 years in prison for preying on women in 2013 and 2014.

District Judge Timothy Henderson agreed and said Holtzclaw will serve the terms consecutively and denied his request for an appeal bond.

Holtzclaw waived his right to remain in custody in the county jail for 10 days, instead opting to be taken directly to prison. Defense attorney Scott Adams said Holtzclaw will appeal.

During the monthlong trial, 13 women testified against Holtzclaw, and several said he stopped them, checked them for outstanding warrants or drug paraphernalia, and then forced himself on them. All of the accusers were black. Holtzclaw is half-white, half-Japanese, and the son of a longtime Enid, Oklahoma, police officer.

Holtzclaw’s attorney had described as a model officer whose attempts to help the drug addicts and prostitutes he came in contact with were distorted. Adams also attacked the credibility of some of the women, who had arrest records and histories of drug abuse, noting that many didn’t come forward until police had already identified them as possible victims after launching their investigation.

Jannie Ligons, whose complaint in June 2014 launched the investigation of Holtzclaw, said she has been under stress because of the case and the fear of being sexually assaulted again. “My daughter and sisters are frightful when a police car pulls up behind them,” Ligons said.