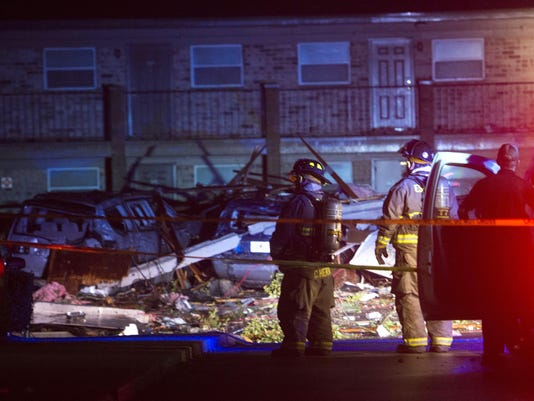 In this Feb. 23, 2016 photo, first responders inspect damage at the Moorings Apartments in Pensacola, Fla. In Florida, the National Weather Service said a tornado hit Pensacola, Fla. Meteorologist Steve Miller said the service has had many reports of property damage and people injured in storms Tuesday night.(Photo: Tony Giberson / AP)

Pensacola, Fla. — Tornadoes ripped through an RV park in Louisiana and significantly damaged nearly 100 homes and apartments in Florida as a deadly storm system rolled across the South, and forecasters warned that more twisters were possible Wednesday along the East Coast.

One of the hardest-hit areas along the Gulf Coast on Tuesday was a recreational vehicle park in the town of Convent, in southern Louisiana. RVs were tossed about and lay on top of wrecked cars and pickup trucks that had become twisted metal. Rescue workers searched through the night to make sure no one was buried in the rubble.

Two people were killed there and more than 30 were taken to hospitals.

Jerome Picou, who lives near the RV park, said the skies grew dark just before the tornado hit.

“Then all of a sudden all kinds of wind and rain started. It was so bad, I had to go inside the house or I would have been blown away with it,” Picou said.

Thousands of people across the Gulf Coast region were without power and the threat of more tornadoes remained. At least 88 million people along the East Coast were at some sort of risk of severe weather Wednesday, the Storm Prediction Center said.

Forecasters with the National Weather Service had to take cover Tuesday in a shelter in Slidell, Louisiana, because a tornado was nearby. Lightning took out the office’s radar, forcing them to use backups.

“We felt the shockwave go through the building,” said Ken Graham of the National Weather Service.

The storms dumped several inches of rain on Georgia, where forecasters had issued a flash flood watch ahead of the storm.

By 7 a.m. Wednesday, Albany, Georgia, had recorded 3.58 inches of rain in a 24-hour period. In Atlanta, the two-day total was approaching 3 inches before dawn Wednesday.

Schools were closed in parts of Georgia, Florida and South Carolina ahead of the storms.

He stopped at The Moorings apartment complex, where winds whipped the roof off of at least two buildings.

Apartment resident Milan Smith told the Pensacola News Journal that he heard the storm approaching and ran to the bathroom. He says the door was heaving and he could hear tree limbs beating on it.

“The upstairs walls were ripped off and you could see right into the kitchen,” he said.