Colorado’s tourists are ending up in emergency rooms at rates far higher than residents, according to a new study 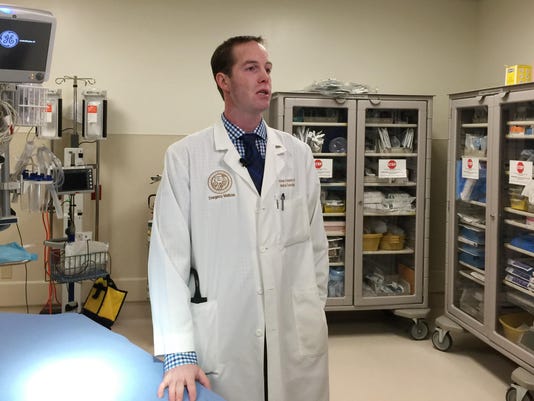 Dr. Andrew A. Montes talks on Feb. 24, 2016, in a hospital emergency room in Aurora, Colo., about a small report to be published in the New England Journal of Medicine. Colorado's tourists aren't just buying weed now that it's legal they're ending up in emergency rooms at rates far higher than residents, according to the new study.(Photo: Kristen Wyatt / AP)

Doctors reviewed marijuana-related emergency-room admissions at a hospital near Denver International Airport during 2014, when the sale of recreational pot became legal. The results will be published Thursday in the New England Journal of Medicine.

The difference between tourists and residents played out statewide.

Tourists and Coloradans also had different complaints related to marijuana. Coloradans across the time period mostly complained of gastrointestinal problems, while the most common ailment by visitors was psychiatric, including aggressive behavior and hallucinations.

Men were more two to three times more likely than women among both groups to complain of cannabis-related ailments in emergency rooms. Coloradans were slightly younger than out-of-state residents, with a median age of 34 for residents and a median age of 35.5 for visitors.

The doctors said the difference between tourists and residents caught them by surprise.

“We didn’t expect people from out of state to actually be coming to the emergency department mentioning this drug more often,” said Dr. Andrew Monte, a toxicologist and emergency-room physician at the University of Colorado Hospital in Aurora.

The cases of both tourists and residents reporting feeling like they’d overdosed on pot were a “vast minority” of those showing up complaining of a cannabis-related ailment, Monte said. Instead, the patients usually reported that pot exacerbated an underlying medical condition, especially schizophrenia or psychosis.

“There’s more communication between patients and providers, and of course there’s just more marijuana out in the community,” Monte said. “People can come in and say, ‘Hey, I’ve got chest pains and I used marijuana a week ago.’ Now, that’s got nothing to do with the marijuana.”

None of the cases in Monte’s study were fatal.

The effect of marijuana legalization on Colorado tourism is a matter of some dispute.

Colorado set records in 2014 for overall visitors (71.3 million) and tourist spending ($18.6 billion). But Colorado had also set records in the previous three years, when pot sales were restricted to state residents with medical ailments. (Tourist numbers for 2015 aren’t yet available.)

The Colorado Tourism Office did report in a 2015 visitor survey that the marijuana laws influenced vacation decisions nearly 49 percent of the time.

But health authorities add that Colorado can’t advertise about how to use pot in other states, and that travelers likely use marijuana differently than people staying home.

“You’re more likely to overdo it on vacation, with marijuana just like with anything else,” said Mike Van Dyke, branch chief for environmental epidemiology at the Colorado Department of Public Health and Environment. “You have that vacation mentality. You’re there to have a good time.”